Three strikes and you're out (the door) looking flawless. 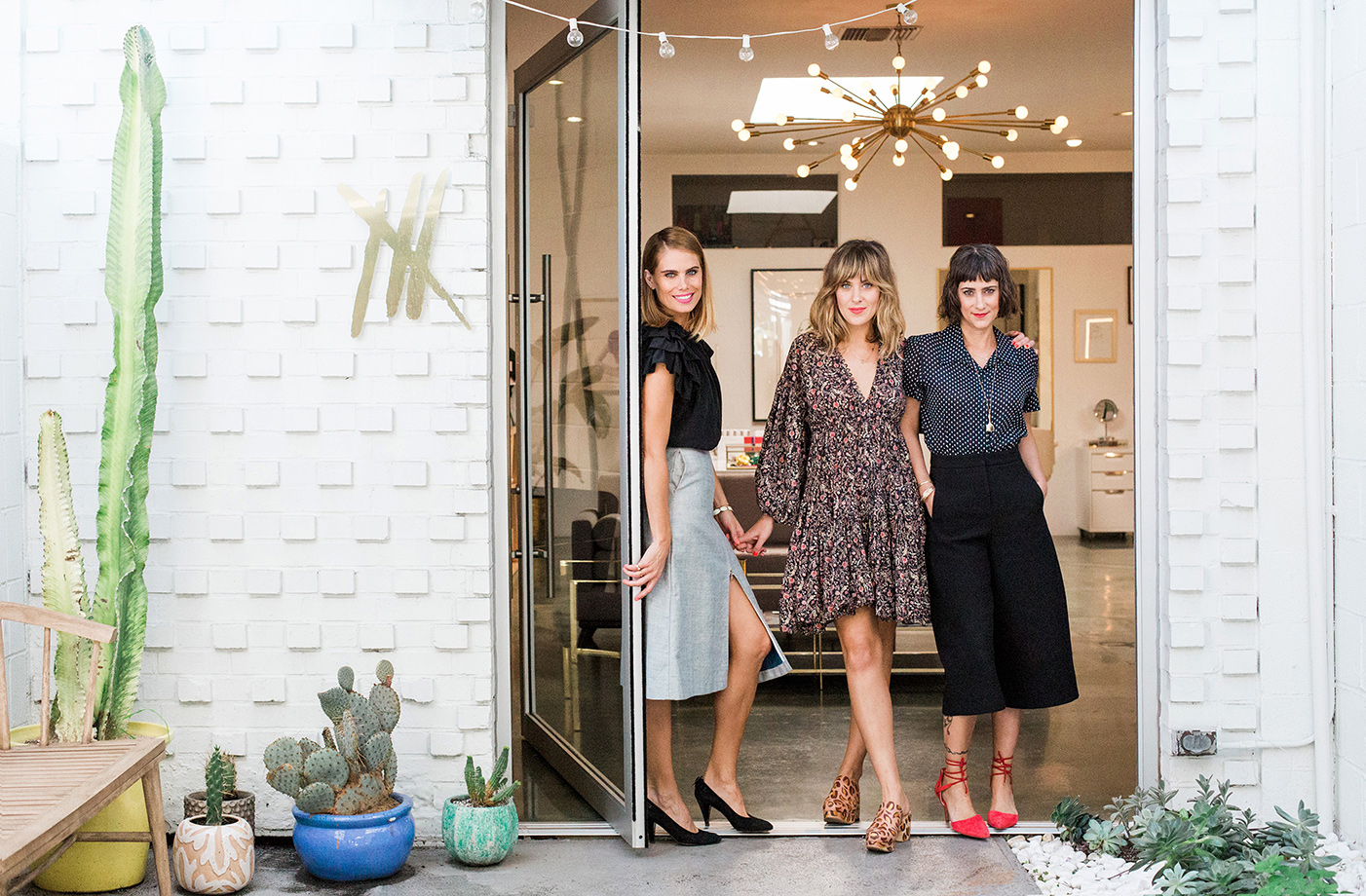 THE STREICHER SISTERS AT STRIIIKE IN BEVERLY HILLS; PHOTOGRAPHY BY BONNIE TSANG

In a new series, VIOLET GREY profiles female beauty entrepreneurs who are considered industry game changers for their individual approach to business. Each one entered the conversation in her own manner and maintained a steady, if not unparalleled, trajectory with her indomitable spirit. Here, we profile the Streicher sisters, each of whom possess these star-making qualities.

I’m all for loyalty and staying true to the dedicated fleet of professionals who keep you looking your best. However, sometimes we get into a beauty rut; other times we're just open to change. If you’ve never visited the Streicher sisters, you may want to put your looks into their hands – just this once.  And then, well, chances are you'll become part of the cult clientele who swears by their talents.

Jenn, Kristie, and Ashley are the reigning cool kids on the beauty block. When I met with them, I was so daunted by the prospect of sitting in front of three industry professionals that, at the very least, I tried to up my game by using Crest White strips before our sit-down. Their beauty studio on Civic Center Drive, in Beverly Hills, serves as their “salon”—although they shun the word because of certain attributed preconceived notions. (You know—snooty, cold, intimidating.)

In fact, their collective space, known as STRIIIKE, feels like a cross between a groovy upperclassmen hangout—comfy sofas, sputnik chandelier, lots of light—and a fancier version of a makeup stage on a studio lot. There is no pretense, only ebullient, welcoming hellos and gestures from everyone—specifically, the sisters. All three have big, warm eyes, which are extra gorgeous (think Betty Boop) partly because of a process by which they swear called Lash Lift.  It’s made with Keratin and involves curling the lashes at their base. “We don’t love extensions,” explains Kristie.  “This is so much better.”

By way of introduction, the sisters are Northern California natives who collectively worked at myriad makeup counters (Estée Lauder, Clinique, MAC, Bobbi Brown) in their teens, and then migrated, one by one, to New York City. The eldest, Jenn, was the first to go. Middle sister Kristie got her esthetician license while in high school, and then followed suit. And the youngest, Ashley, joined her siblings after graduation. Each trained at the Warren Tricomi Salon in midtown Manhattan, and while there they found their unique talents and honed their techniques and skills.

Jenn, the makeup artist in the trio, was the first to bid adieu to NYC and move to LA. “I had to essentially start from scratch,” she says, referring to her client base. “There’s a big difference between makeup in NYC and makeup in LA. On the East Coast, it’s more editorial. Here, everything is celebrity driven.” But what she lacked in connections, she made up for in talent. And soon she was working steadily, first with men’s grooming. “Yes, men get groomed. Everyone has insecurities about the way they look,” she says. And then her female roster shot through the roof. “I can’t attribute it to any one thing,” she says. “Just years of doing makeup.” Meanwhile, Kristie, who had received national recognition in 2003 when New York magazine touted her brow-grooming talents in its annual Best of New York issue, returned to the west coast, in 2005, as an in-demand eyebrow guru. (See featheredbrow.com) And little sister Ashley—who apprenticed under Edward Tricomi (and had the distinction of being the youngest trainee ever on the floor), and studied at Bumble and Bumble and Vidal Sassoon—became a licensed hairdresser and moved shortly thereafter. “If I was doing someone’s makeup and [she or he] asked if I could also do hair, I’d say, ‘No, but you should call my sister Ashley,’” says Jenn. And in many ways that’s how their business began.

Striiike opened its doors in 2015, and the one-stop beauty (make-up, hair, brows) boutique is Nirvana for women on the go.  Incidentally, they’ve just added skincare to their menu, as well.   Renowned facialist Melanie Simon—the creator of ZIIP, a nano-current device used for anti-aging and acne—is on-call to administer her signature electrical facials from a private room off the main floor.  There is also a perfectly curated marketplace peppered with the sisters’ favorite products—including Vintner’s Daughter serum, Lebon toothpaste, beautyblender, Mary Kay brow gel, and Biologique Recherche potions, among others. 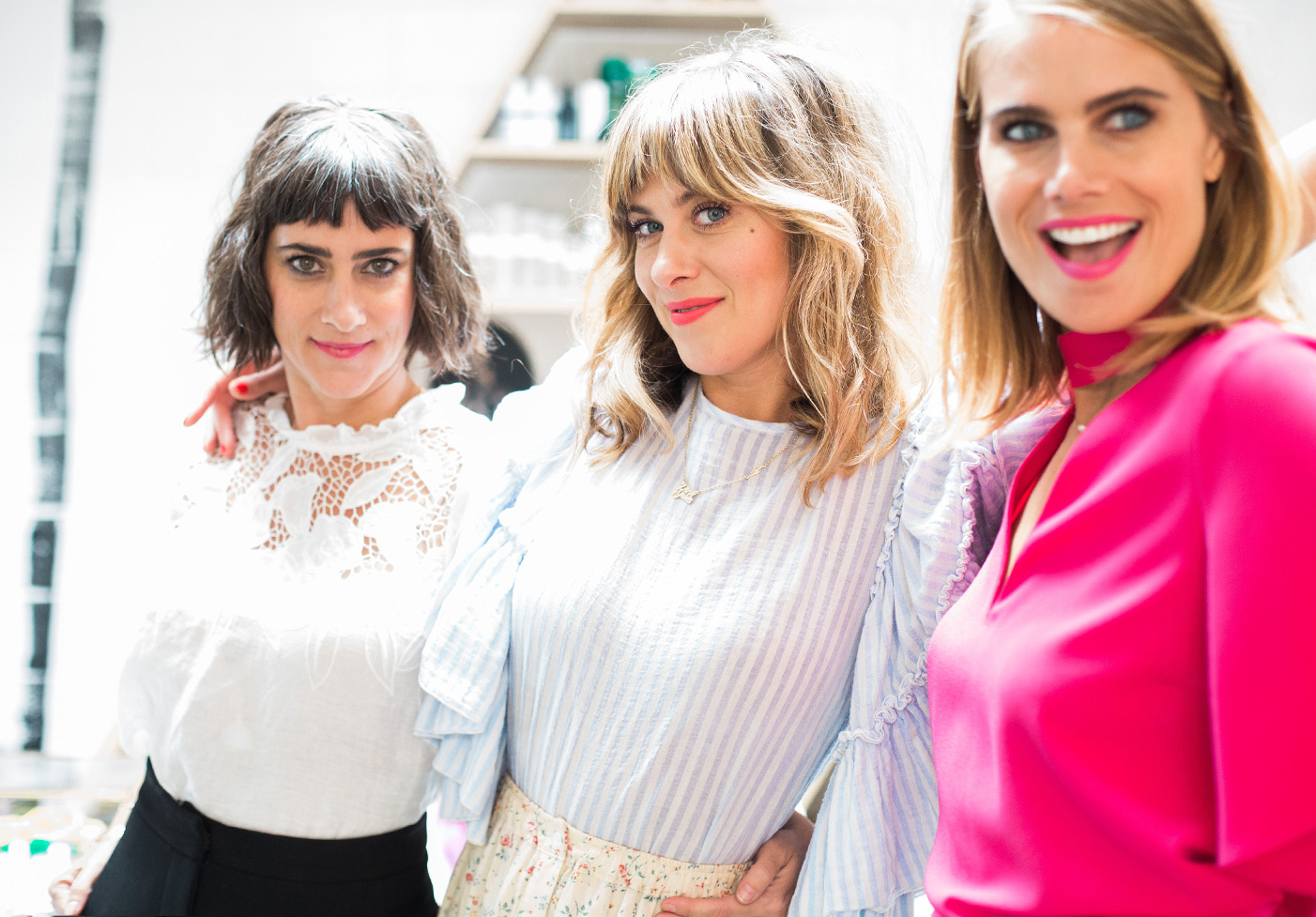 What sets this brand apart from so many others is access—specifically, your access to them. While each sister has her own roster of A-list clients—Gwyneth Paltrow, Adele, Emily Blunt, Mandy Moore, Kiernan Shipka, the list goes on—they are not in the business of working only with celebrities.  So, even if the red carpet isn’t your regular walkway, you, too, can get in on the glamour.  In their space, they welcome and maintain a steady flow of customers  (“Never more than eight,” says Ashley) from all types of industries. Anyone can make an appointment.

And lest you think you may not be cool enough for these girls, I can assure you it’s a non-issue. We are “hostesses with the mostesses” says Ashley, on par with Southerners. And in that vein, they adore a party. “We love to entertain and to bring inspiring and creative people together. Sometimes it even leads to collaborations,” says Kristie. “We love community.” Each month they host a wine-and-beauty soirée at their studio. Their friend Helen Johannesen, a sommelier who runs boutique wine shop Helen’s Wines from inside Jon & Vinny’s restaurant on Fairfax, gives a seasonal wine tutorial—replete with tastings—and the sisters offer makeup tips. Last week they hosted a Spring Fling–themed fete: rosé was flowing, and pretty-in-pink products such as Laura Mercier Caviar Stick Eye Colour and Glossier Cloud Paint were on parade.

And that’s just the thing about team Striiike—they’re fun, they’re fab, and, most important, they are experts in their fields. You’ll always leave feeling a little happier and looking tons better than when you first arrived. In the Streicher Sisters, we trust.

Ashley: Bright in the morning and dark and smoldery at night.

Jenn: I like to keep it really cozy. I think a comfortable bed is very important. I tend to spend a lot of time in my bed. I love to work from bed and watch TV in it, and I am a big fan of naps.

Kristie: My bedroom is my favorite room in the house. There is a fireplace, and I have large windows that look out onto nature. It is upstairs and away from the rest of the house, so I find it very cozy and serene.

A: I have a king-size (just for me) Casper mattress and sheet set in all white. I LOVE sleeping, and my bed is the MOST important thing in my entire house. I feel like my bed is ON POINT right now. #comfortzone

J: I like my bed most when my husband is in it. I try to get my son, Arrow, to sleep with me when my husband is away, but he prefers his own bed. I have a California king with a tufted headboard. I am kind of obsessed with sheets. I have lots of washed linen by Matteo, and I just got a set from Casper, which are really, really nice.

K: Our bed is quite elevated off the ground, so it feels like a fortress. We recently purchased a Tempur-Pedic mattress that I dressed with bamboo sheets with my favorite NIGHT pillow (and silk pillowcases).

A: I’m an Aquarius, so I require my sleep and I love it. Eight hours is normal, but if I can get nine to ten hours, I’m very happy.

K: I usually get eight to ten hours.

J: Water, earplug (yes, I wear only one), nighttime vitamins, kid monitor. And I love to read before bed.

A: Sometimes I can’t go to sleep at night because I’m so excited to wake up and have coffee. I love the ritual of making my morning coffee—grinding fresh beans, waiting for kettle hot water, AeroPress Americano with steamed coconut milk.

J: I hardly ever eat breakfast, but I always have a coffee with some steamed almond milk, which I consider a great breakfast.

A: Usually. Either hot yoga or a hike around Laurel Canyon.

J: I always think about it, and sometimes it happens.

A: I rinse my face with warm water because I wash it thoroughly at night. I find it’s too much to wash again in the morning.

K: Nothing but moisturizer. I really like the Crème Elastine from Biologique Recherche. I try not to wash my face or do too much. Less is more when it comes to my skin.

A: I wear EltaMD SPF followed by a Nars concealer for spot treatment that I blend with a beautyblender. A bit of Glossier Cloud Paint for my cheeks. I always darken my beauty mark and use Mary Kay brow gel.

J: There really isn’t one that I ALWAYS use. I like to change up my products continually because I like to try and know about all products. Right now I am really into Chantecaille Just Skin, Laura Mercier Secret Concealer, Sisley Phyto Eye Twist in Topaz, Hourglass Ambient blush, and always a pop of color on the lips.

K: I really like the RMS Un-Cover Up or Karyn Grossman Tinted SPF 50, Mary Kay clear eyebrow gel, and La Prairie Cream Blush in Peach Glow—it’s the best and quickest way to add that young, fresh-faced ballerina glow. I like to use a dampened (not wet) beautyblender with Caudalie Beauty Elixir for an extra burst of radiance. For hair I keep it pretty simple: Sashajuan Dry Shampoo for texture when my hair is clean (aka lifeless and flat)—it adds instant texture and volume. This is also great to use for a braiding because it adds better grit and hold and makes for great postbraid texture.

A: I wash every three days or so. After I wash, I spray a little Davines Oi All in One Milk and let it air-dry without touching or brushing. The next two mornings I will shower with my Shhhowercap and not touch it. My hair usually looks better after I sleep on it.

J: I wash my hair two to three times a week, but I always wet my hair. Ashley tells me not to brush my hair, so I usually just brush my bangs and that’s it!

K: Air-dried with a spritz of Davines Oi All in One Milk—if I wash it. If it’s clean and dry, it’s usually flat and boring so I will add some texture spray and a few cool-girl waves using a flat iron with smooth sides for easy and cool undulations!

A: I usually respond to any emails in my inbox and recheck my duties for the day.

J: Coffee for me and my mister, and then it’s pretty full-on Arrow time until I take him to school at 9. Then I start my emails.

K: Return emails and phone calls and check my schedule.

A: Depends on the work. It’s usually a set, a hotel room, or STRIIIKE. Each morning varies.