Meet the business-savvy model and entrepreneur with a heart of gold. 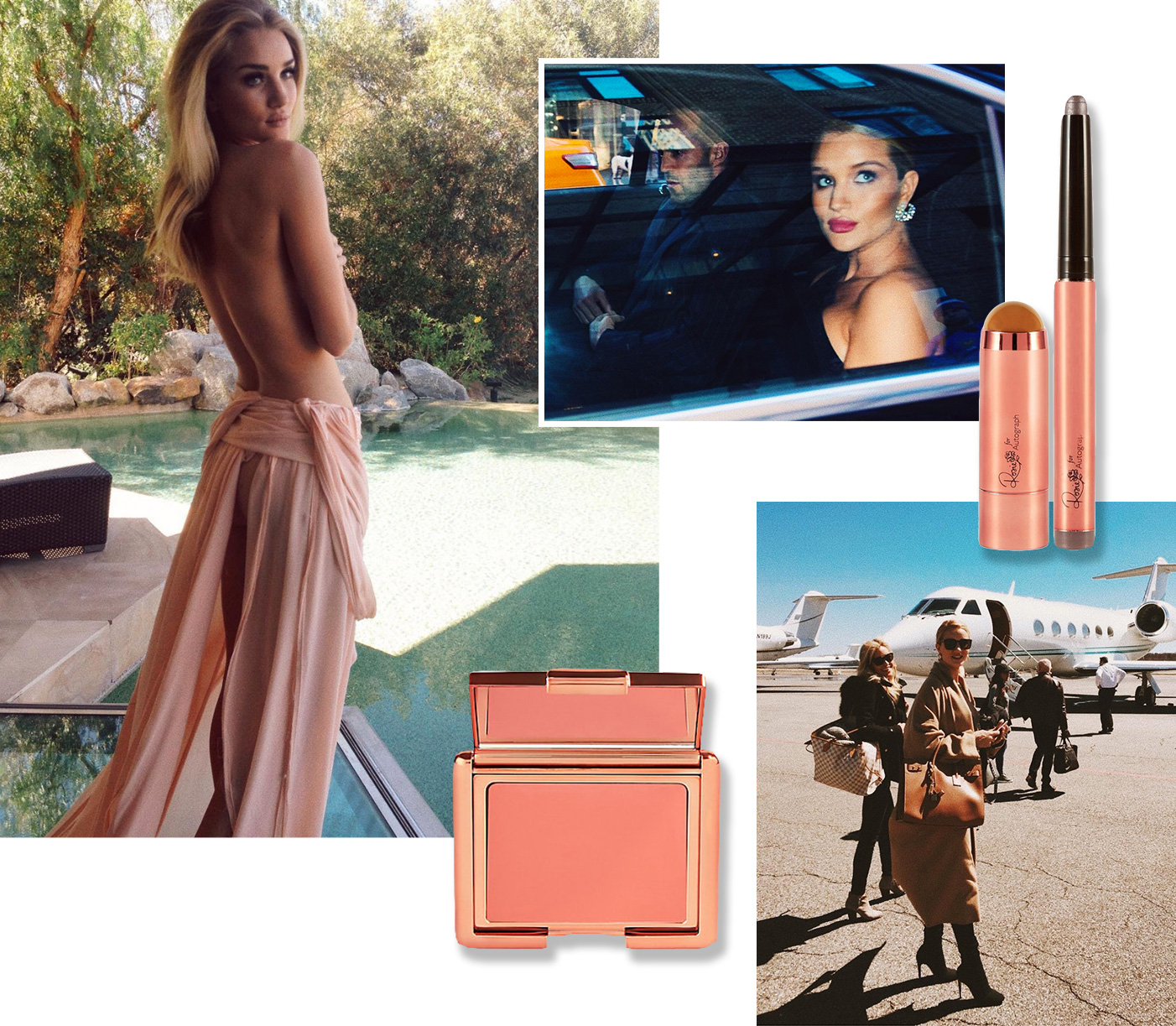 “I grew up in one of the most rural parts of England and no one I knew had any contacts in the fashion world,” says businesswoman, model, and actress Rosie Huntington-Whiteley. “I wrote letters to a few magazines, retail shops, and fashion companies asking for an internship opportunity, and the only place that replied and accepted was a modeling agency in London’s West End. I arrived at the office hoping to attend fashion shows and photo shoots, visit design houses, and garner real insight into the creative side of the industry. I don’t think I had a clue what a modeling agency actually did!”

“Instead, I spent the week in a tiny smoke-filled office with wine-drinking bookers hustling down the phone. My days were spent running errands, photocopying, picking up the phones, making endless cups of tea, emptying ashtrays, and faxing girls their schedules. I loved every second of the buzz and excitement, but I especially loved it when models would stride into the agency to pick up their portfolios or her lists of castings for the day. They were the epitome of glamour and sophistication.”

Little did Huntington-Whiteley know that this agency would open the door to her future. Eight months after her internship ended, while in London, she popped in to say hello to her former coworkers. A new booker asked to take a few Polaroids because she was starting a “New Faces” division. Later that day, the booker called and asked if Huntington-Whiteley would be open to going on a few castings and go-sees. That was fifteen years ago. Huntington-Whitely went on to grace the covers of British Vogue and Harper’s Bazaar UK. She became a Victoria’s Secret runway goddess, and landed plum roles in films such as Transformers: Dark of the Moon and Mad Max: Fury Road. She is the face of Paige Denim and the founder of Rosie for Autograph, a line ranging from intimates and sleepwear to makeup and fragrance.

“Throughout my career I worked with many different lingerie brands, and I was very drawn to beautiful underwear,” she says. “Marks and Spencer is known to be the UK’s biggest selling lingerie company, so I approached them in 2011 and asked if we could collaborate.” Her dream became a reality when the Rosie For Autograph brand launched in September 2012. “I wanted to create a world that was deeply feminine and graceful while being aspirational yet approachable,” she explains. “Underwear shouldn’t have to compromise comfort or style—or break the bank.”

Huntington-Whiteley’s collection has since expanded, and customers go mad for her pajamas and bathing suits and skin potions and cosmetics. Lingerie remains her best-selling asset, but it is her beauty hero product, the Lady Rose lipstick, that is most evocative of the brand’s ethos. The shade, which perfectly complements Huntington-Whiteley’s natural lip color, is similar to that of an English rose—which, she explains, “has always been the overarching theme: delicate, feminine, and beautiful in nature.”

Relaxing and peaceful. It has a barnlike feel, with wooden beams and high-pitched ceilings. Soft, neutral dreamy colors for the furniture, art, and linens, and plenty of daylight when the blinds are up. I once read that bedrooms should be used only for sleeping and lovemaking. I rarely watch TV in bed, and devices and phones are kept out of the room when sleeping.

I also sleep with the windows open if I’m not in a city. Or I like to keep the room temperature very cold, which I think comes from growing up in a freezing 200-year-old farmhouse in the deep countryside of England. Stoves and log fires kept the house warm. I remember as a child being able to see my breath when I got into bed at night—that’s how cold it was.

I’m quite indulgent when it comes to my bed! I have no guilt about investing in a quality mattress and beautiful linens. Good rest is crucial for well-being and energy levels—I can be quite moody if I don’t get proper sleep! Because I’m often traveling and staying in hotels, being able to get into my own bed at night feels indulgent and relaxing.

My days start anywhere from 5 to 7 a.m., sometimes earlier, as I’m often jet-lagged from traveling. On the weekends, if I’m not working, I’ll sleep in until around 8 a.m. One of my favorite things about living in LA is the sunny and quiet mornings.

I have a feeling my sleep patterns and requirements are all about to change! But if I can get eight hours I feel well-rested. I have a habit of mentally counting how many hours I’m going to get as I get into bed every night. If I’m set to have less than five, I worry I’ll be tired and miserable the next day, which in turn keeps me awake longer.

A bottle of Caudalie Beauty Elixir—it’s so refreshing and hydrating for the skin—and By Terry Baume de Rose Lip Balm and my Rosie for Autograph Divine Miracle Oil and Divine Body Cream, which I lather on every night. The scent stays on the sheets and my pajamas, which I love.

First thing I do when I wake up is drink a liter of water, as I get dehydrated overnight. It wakes me up and gets the body and digestive system moving. Then coffee. I’m useless without my coffee! A latte.

Yes, always. If I don’t work out in the morning, I can pretty much guarantee I won’t do it later in the day.

I steam my face with warm water and a washcloth. I switch my products according to the environment or how my skin is looking. Lately I have been using Caudalie Foam Cleanser—it’s gentle and very hydrating. Then I love to use Caudalie Vinoperfect Radiance serum because it leaves my skin with an amazing glow and is the perfect base for makeup. I use an SPF every day. Finally, I set my skin with the Beauty Elixir or Rose Water by Santa Maria Novella.

SPF. I love Dr. Sturm Sun Drops. You can mix them into your moisturizer, serums, or foundation—kind of a genius product!

Depends! Usually a wild mess unless I tie it back at night. My favorite brush is a Mason Pearson. I have had one since I was a little girl. My grandma gave one to me, and I remember it was white and had my name and little flowers hand painted on it. I love Sachajuan shampoos and conditioners. The Silver Shampoo and Color Save Conditioner are my favorites. I recently discovered Olaplex, which is a game changer for processed or colored hair.

Headline news on my phone. Emails, texts, and then a scroll though Instagram while drinking my coffee.

I usually have to speak to my design team back in London several times a week via FaceTime, so I will do those calls around 8 or 9 a.m. because of the time difference. I also like to send emails early in morning so things can be accomplished throughout the day.

If I’m working on set, my call time is usually between 7 and 8 a.m. I prefer to start shooting earlier and be done earlier. Currently I’m looking for an office space outside my house so I can separate business and home life, but for now I work from my office at home if I’m not out and about during the day.