The fabulous French makeup artist who built an empire based on the notion that less is more. 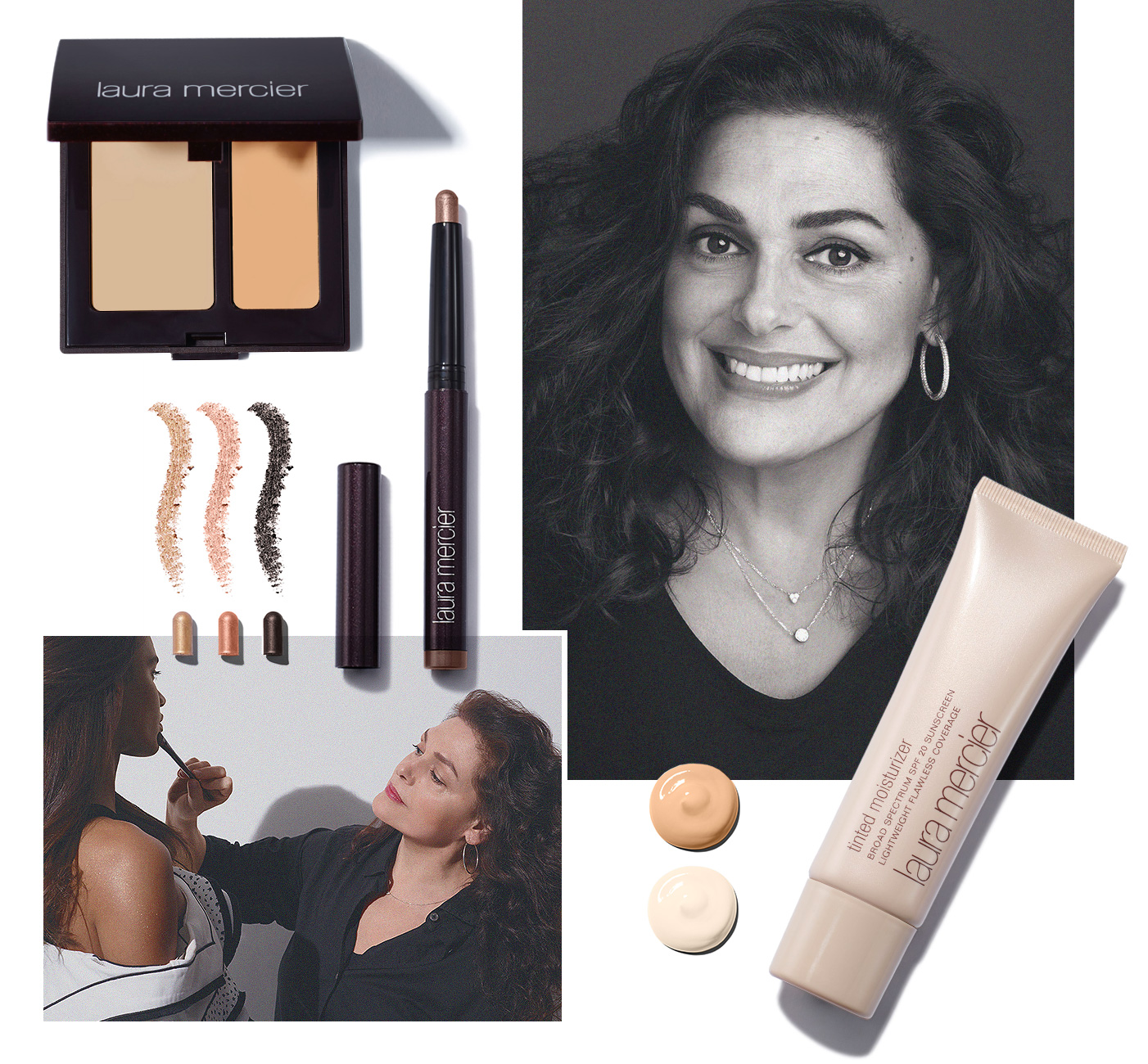 “Everything excites me about beauty!” exclaims Laura Mercier, the one-woman makeup phenomenon, who is pondering what has kept her at the top of a notoriously competitive industry for more than 30 years. Born in the South of France, Mercier attended art school with the intention of becoming a painter. But shortly after graduating, the nascent businesswoman recognized that the commercial possibilities of the beauty industry were far more lucrative than those of the fine arts.  And so, she turned her talents from the canvas to the face. It was not a difficult decision: “Whether it is beauty related, pampering, putting on perfume, the ritual of putting on your makeup—I love it all,” she says.

Mercier moved to New York City in the mid-1980s, and quickly amassed a portfolio of editorial work for publications including Elle, Vogue, Vanity Fair, W and Glamour. For the next decade, she was a frequent collaborator of famed photographers Steven Meisel and Patrick Demarchelier, as well as the makeup artist of choice for celebrities like Sarah Jessica Parker and Julia Roberts. Notably, she developed a long-standing relationship with Madonna wherein she helped to create some of the pop star’s most iconic looks.

Despite her success, Mercier was ready to expand beyond editorial work by the mid-1990s. “Like many makeup artists, I was always keen to create my own product line,” she says.  And in 1996, Laura Mercier Cosmetics was born. “At that time, there were products that didn’t exist on the market, and I saw this great white space to create products such as Foundation Primer and Secret Camouflage [concealer].” Armed with chic, minimalist packaging and formulations that actually, you know, worked, Mercier had an instant hit on her hands. The Secret Camouflage, which was inspired by the professional products she was using on models’ overworked skin, was particularly in-demand.

Long before the current French beauty fervor, Mercier, the brand and the woman, represented the effortless, understated look that most women strive to achieve. Mercier laughs heartily when asked about the eternal vogue for all things French. “I don’t know why people are so crazy about French beauty,” she smiles. “I think maybe because, for the most part, Americans are fascinated by the ‘understated’ look that is the basis of French beauty… for French woman, a little goes a long way, and it can be as simple as just a bold red lip, a swipe of mascara, and that is it. It is more about sensuality, versus adding more.”

After more than two decades helping women around the world create a “flawless face,” Mercier remains as enthusiastic as ever about her work. “What I love about having my own brand is the ability to create what I really believe in, and sell what I believe in,” she says. Her current project is The Laura Mercier Makeup Artist Collective, which partners her brand with artists she personally loves, including Pati Dubroff, Jenn Streicher, and Mario Dedivanovic. “For me it is not about one person, it is about celebrating artistry and the talented individuals who share your passion and philosophy,” she says of her vision. Laughing, she returns to the subject of what drives her. “I have always had this in me, and I feel like I am never finished and there is always something more to do.”

It is simple, clean, and a little Zen. There are no carpets or rugs, and it’s not full of objects—for the sake of breathing clean air.

I have a very firm mattress. I like very soft sheets. I have my favorite brands that do a silk-and-cotton blend that I love.

It depends. I’m not an early riser; the earliest is usually 7 a.m. in order to be in good shape.

I need a good eight hours.

Lip balm, and I like to spray a little rose scent or extract on my pillow.

I drink tea in the morning, usually a green tea.

Unfortunately, I don’t work out regularly. I’m not that kind of person—I wish I was. When I’m in France, I prefer to be outside. But when I’m in New York, I like to do some yoga and stretching, and I’m more into meditation to feel good. I usually do it in the evening during the week and midmorning on weekends.

Always a gentle milk or toner on the face. Quick cleanse in the morning (the big cleanse is in the evening), and a very simple application: Repair Serum, Repair Eye Cream, and Mega Moisture Crème.

Secret Camouflage and always a brow product—either the Sketch & Intensify Pomade and Powder Brow Duo with the brush or a brow pencil. For eyes, either the Tightline or a kohl eyeliner. Lips could be a lipstick, a lip glace, or a sheer lipstick. Then maybe a little bit of a bronzer, the Matte Radiance Baked Powder #4.

I sleep with a bun at night, so in the morning I just need to brush my hair—it’s pretty low-maintenance. The high-maintenance routine is wash, condition, put on some keratin ampules, etc., but I don’t do that every morning. The shampoo and conditioner from my dear friend Serge Normant are my favorites.

I don’t want to be connected the minute I put my foot on the floor. I usually watch the news, either in the morning or when I come back home.

I read my emails in the morning to prepare for the day.

It all depends on the meetings I have and the things I need to accomplish. Every day is different.