Meet the accomplished nail artist with a penchant for creating beauty havens and glossy, minimalist lacquers. 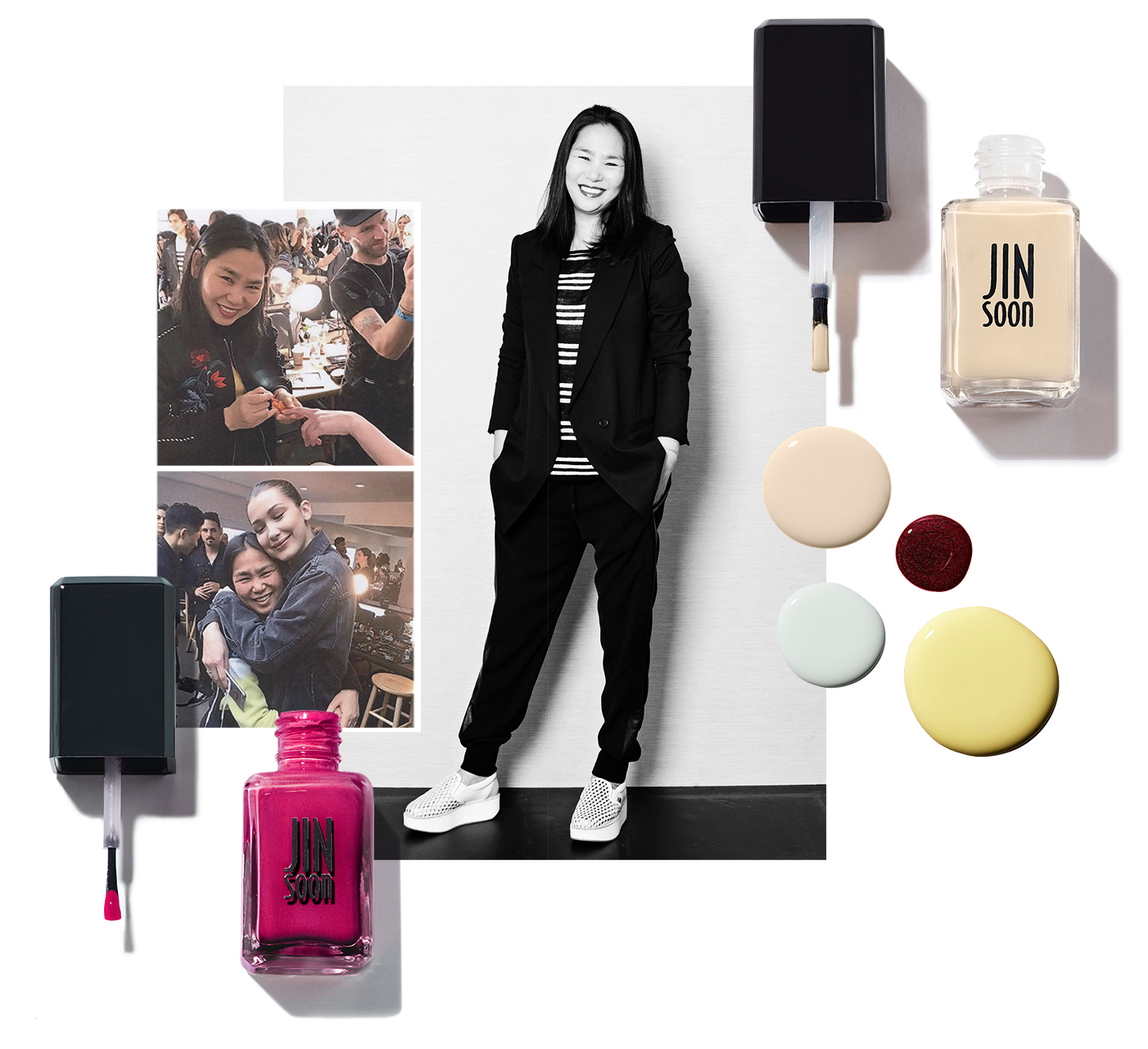 While nails have had their fair share of fleeting moments in the beauty industry, Jin Soon Choi has always managed to keep a classy, minimalistic aesthetic. Her foray into the beauty business came only after she tried her hand at several different jobs (waiting tables, working in a grocery store) upon moving to New York City from Korea in 1991. When Choi took a position as a manicurist on the Upper East Side, she felt inspired, and thrived in the bustling environment. “I loved it because I could speak to interesting people, and a lot of them became my friends,” she says. “Also, I could do my job and, at the same time, learn English by talking to clients.”

After several years working at a variety of salons, Choi was introduced to an agency by Andrea Pomerantz, former beauty director at Cosmopolitan. Shortly thereafter, she was getting booked for editorial shoots and at-home services, where she earned the nickname “Bicycle Jin” for cycling to and from her clients’ apartments on her trusty ten-speed. “From there, my career went so fast,” she says. Because of her talent and charm, Choi was taken under the wing of photographer Steven Meisel. She became a consistent part of his team, along with hairstylist Guido Palau and makeup artist Pat McGrath. “Everything [Meisel] does I really admire,” she says. “He sees everything. He sees makeup, he sees hair, he sees clothes, he sees nails. That’s why he’s such a well-known photographer. He’s very detail-oriented and artistic.”

But in 1997, Choi was presented with an opportunity she couldn’t turn down. One of her longtime customers suggested she open up her own salon. Choi was worried she didn’t have the money to fund it, but the friend encouraged her to apply for aid from Minority Women in Business, a nonprofit that lends funds to small businesses for one year. After submitting her business plan (and getting the green light), Choi was able to launch her first salon in the East Village in 1999. Not long after she opened her doors, The New York Times Magazine dedicated seven pages to her story and her nail art, and crowned her the “nail guru.” For Choi, who counts Sarah Jessica Parker as one of her earliest clients, the wheels were in motion. To date, she has four salons, each of which stands out as calming beauty oasis amid the frenetic energy of the city.

To reflect her aesthetic (her work can be seen on covers of Italian Vogue, as well as advertising campaigns for Prada, Dior, and Jimmy Choo), in 2012 Choi revealed JINsoon, a nail collection inspired by her editorial trajectory. The formula is 5-free (meaning free of chemicals like formaldehyde, dibutyl phthalate, toluene, formaldehyde resin, and camphor) and is patented for its super-glossy finish. “I wanted my line to reflect high fashion,” says Choi, “yet be very clean and minimalist.”

Chaotic. We’re in the middle of redesigning my entire apartment.

I love my sheets. They are neutral in tone, which makes them very easy to match whatever aesthetic we choose for our newly remodeled room. They’re also very soft and high quality, which I love.

Nothing beauty related, but I must have extra pillows. I love to hug pillows when I go to sleep.

On set I usually drink peppermint or chamomile tea and have eggs and fruit. But if it’s a normal morning at home, I eat one apple.

No, never [laughs]. Although if I’m on a shoot, I will pull out my jump rope after lunch and jump for about an hour. I carry my jump rope with me everywhere.

I follow a K-Beauty essence routine on a daily basis. In the spring and summer months, I do a five-step regimen that includes toner, serum, moisturizer, sunscreen, and, most important, eye cream. I cannot stress how important it is to use an eye cream every single day. It’s my secret weapon. My favorite one at the moment is EVE LOM Eye Cream. In the winter I will do five or six more extensive steps because my skin will be dryer and will need extra care.

I don’t wear makeup at all. I just do my skincare routine every morning. If it’s something important I will swipe on a berry lip tint. I like the NARS Satin Lip Pencil in Palais Royal. I will dab on a little bit and then push into my lips to make it look more worn in, like a stain.

I wash and condition my hair with Bumble and Bumble’s Hairdresser’s Invisible Oil line, and that’s all. I wash my hair at night and let it dry as I sleep. I don’t do anything to it in the morning. I get a cut every three to six months from K-Town salon, Kakapoka.

First, email. Then my husband, John, will read The New York Times out loud and I’ll listen. Sometimes he turns on BBC or NPR radio, and I will listen to that too as I’m getting ready.

I check my emails. I usually have a few from my PR team that I need to answer. Then I look into the schedules for all of my nail technicians at my four salons and see who is working where.

It depends on where my “office” is that day. If I’m on a shoot, I will usually get there around 8 or 9 a.m. If I’m in my salons for the day, I generally arrive around 2 p.m. But I’m always working on something at home before I head to the salons.