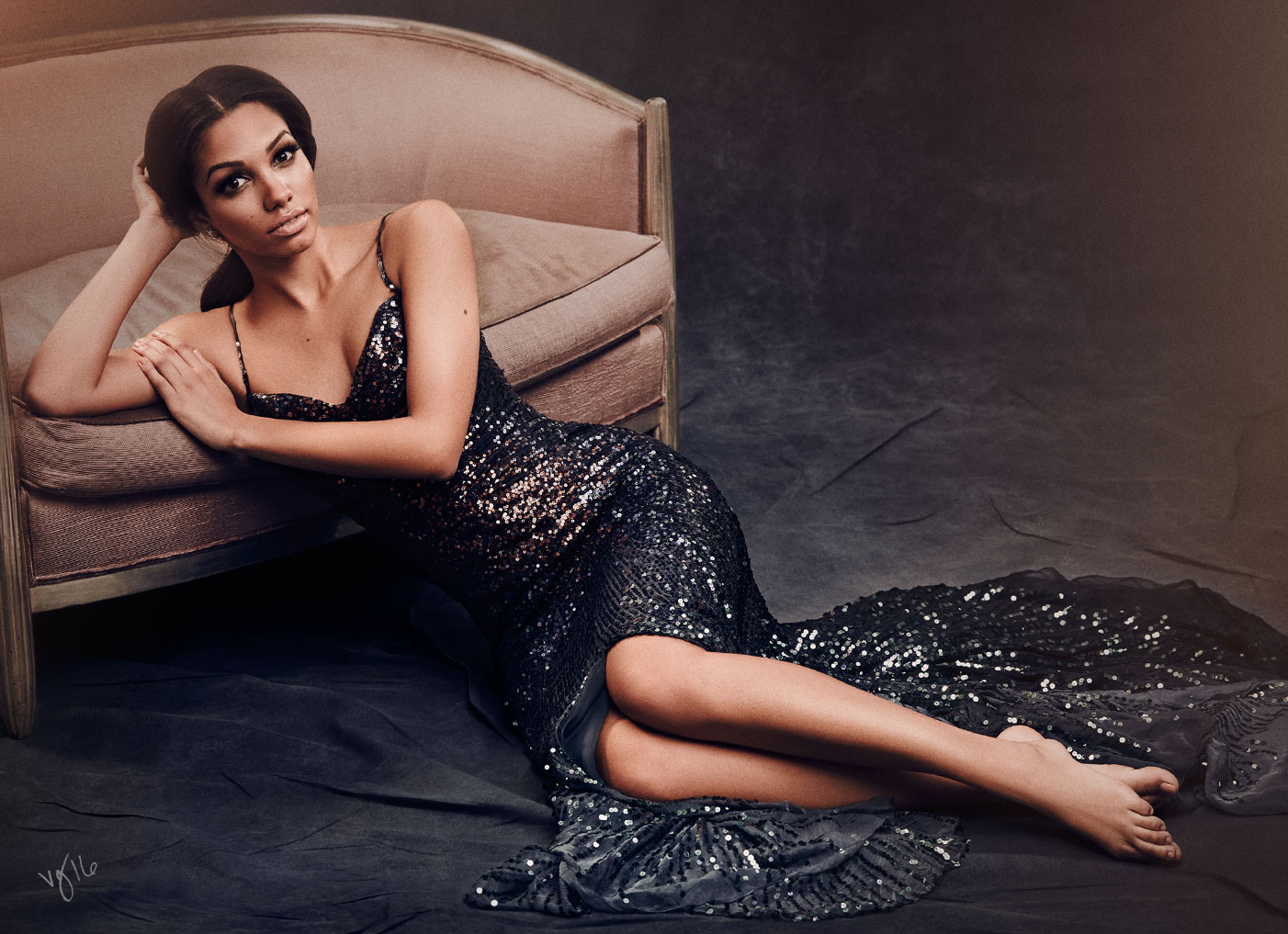 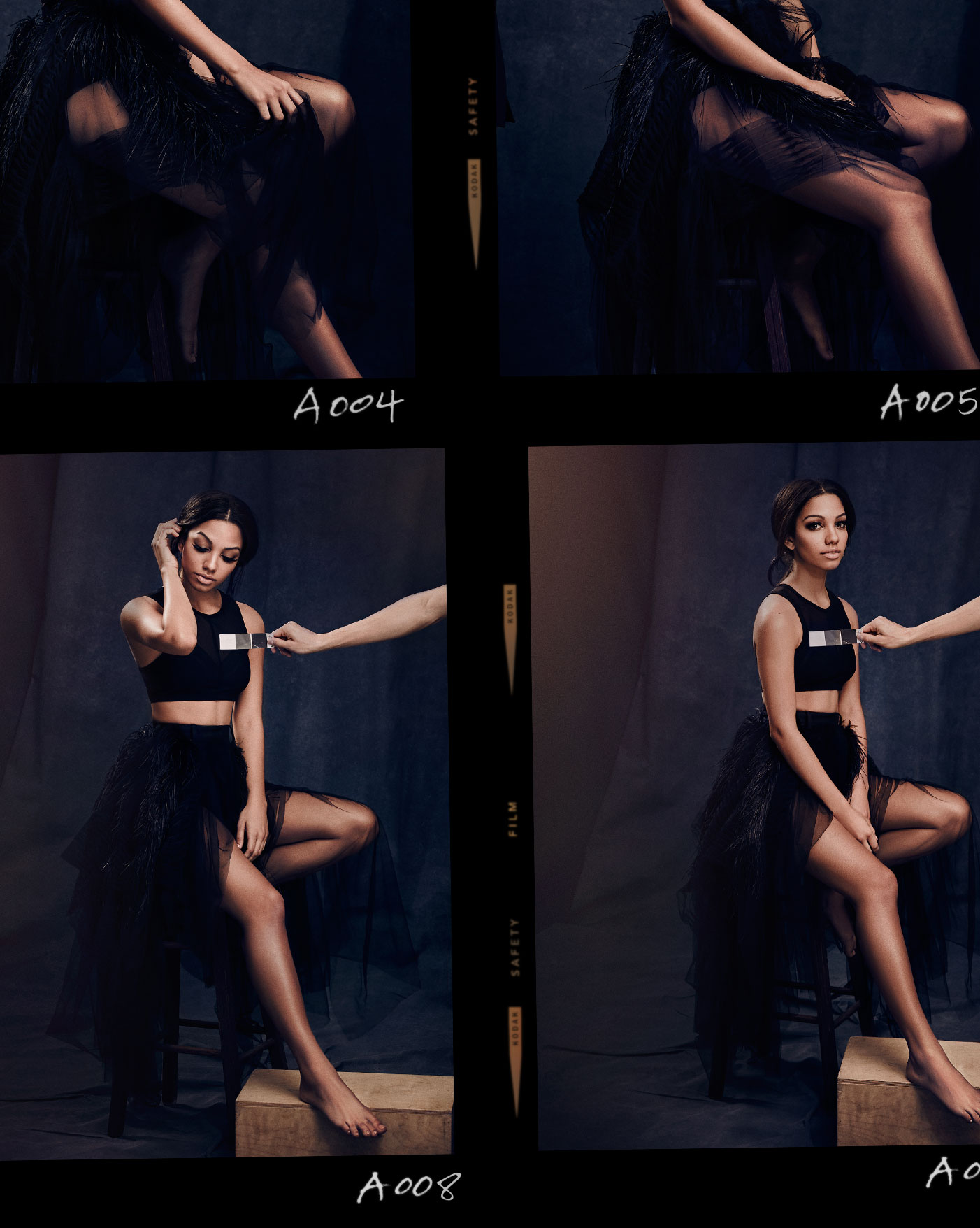 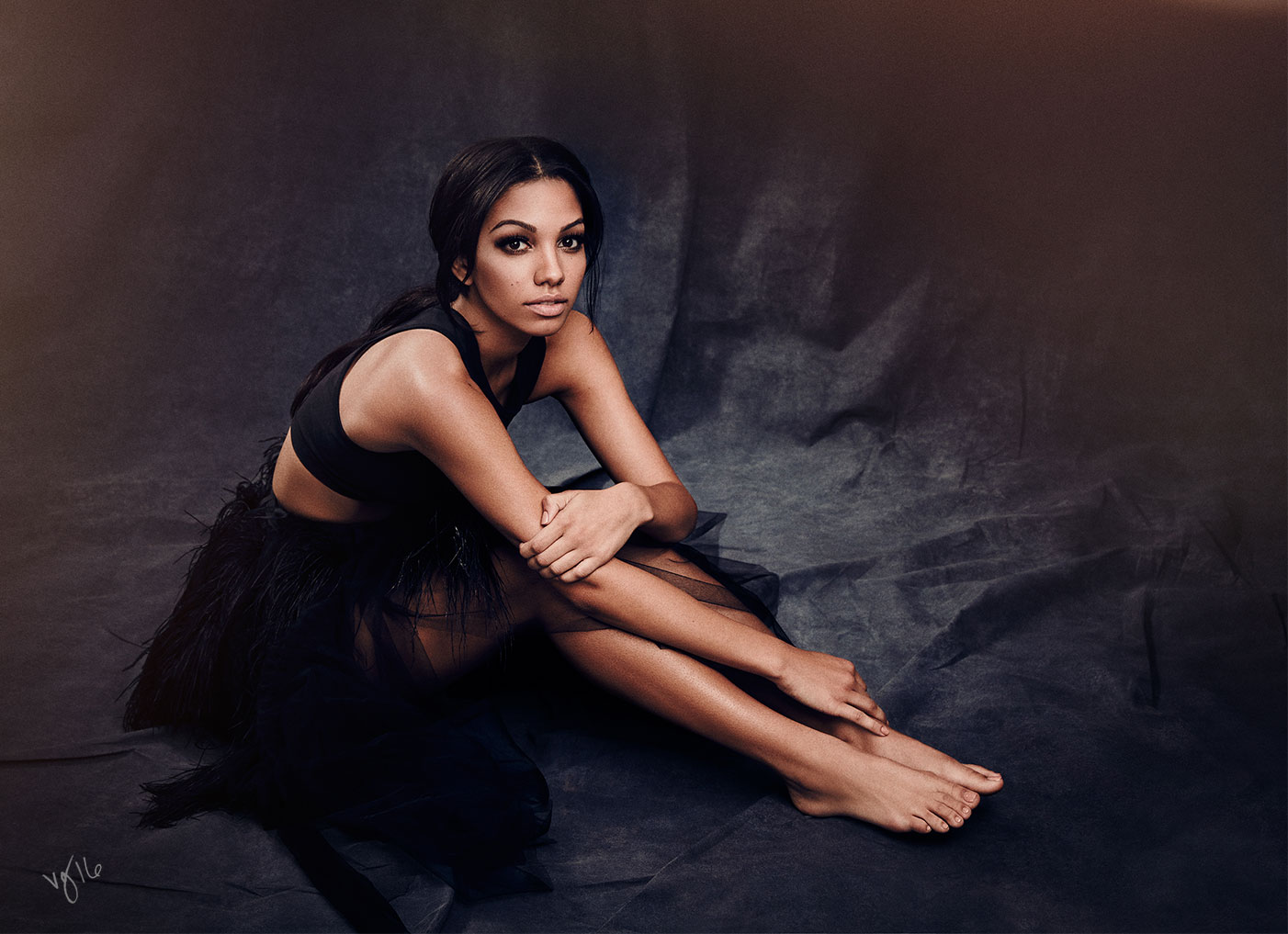 Miss Golden Globe
BEAUTY CREDITS
FASHION CREDITS
THE ARTIST
Monika Blunder | @monikablundermakeup
THE INSPIRATION
A Hollywood ingenue.
WHERE TO WEAR
New Yorkers for Children Spring Gala; Harvey Weinstein’s Golden Globes after-party
MEET THE FACE
Corinne Foxx | Model | @corinnefoxx
“What will Ricky Gervais do? Will I trip and fall with someone’s award? Will Jon Snow be there?” These are the questions that bubbly model Corinne Foxx (who charmingly introduced herself to everyone on set upon her arrival) volleys during her photo shoot for The Violet Files. Her mild but excited apprehension comes with the territory of her new appointment as Miss Golden Globe 2016, an honor previously bestowed on Hollywood progeny like Dakota Johnson and Rumer Willis.

While sitting in makeup artist Monika Blunder’s chair at Milk Studios, the 21-year-old offspring of Oscar-winning actor and comedian Jamie Foxx contemplates what the future might hold. “I’m looking forward to getting my name out there on my own, not as just [his] daughter,” says Foxx, who will soon be graduating from USC with a public relations degree. “Hopefully in ten years I’ll have a successful acting career,” she notes. “I also want to be a writer and I want to start my own business, so a lot can happen.” Keep us posted, Miss Foxx.

Read on to see the beauty tutorial brought to you by Tom Ford Beauty. 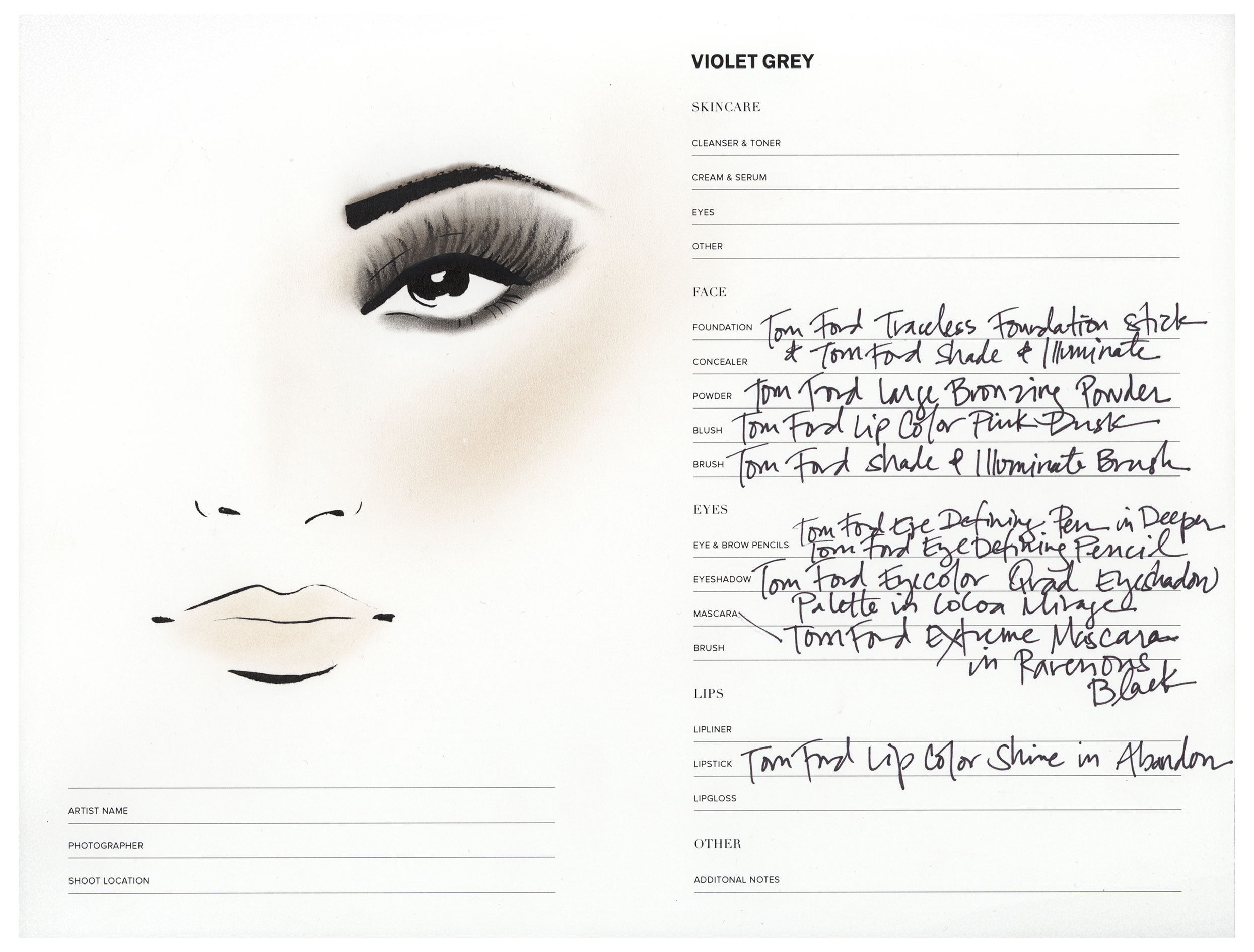 COMPLEXION PERFECTION
I love treating this as a concealer to add coverage to just the areas needed. Use a foundation brush or dab on cream with your finger.
Tom Ford
Traceless Foundation Stick
Tawny

THE ARTIST’S BRUSH
This brush is perfect for perfecting a fresh complexion—it blends the foundation seamlessly into the face for a flawless (and natural-looking) finish.
Tom Ford
Shade & Illuminate Brush

THE RIGHT DEFINITION
To softly define Corinne’s bone structure, I buffed the darker shade from this contouring palette underneath her cheekbones; around the temples, forehead, and jawline; and down the sides of the nose. Then I dabbed the paler shade on the high points of the face to add light and dimension.
Tom Ford
Shade & Illuminate
Intensity Two

MATTE MAKER
I swirled an eyeshadow brush into two of the medium brown shades to mix, then lightly brushed them onto the lid, crease, and lower lash line to make the eyes appear bigger. Next, I applied the dark brown shadow along the upper lash line and blended it toward the outer corners to give the eye a lifted look.
TOM FORD
Eye Color Quad
Cocoa Mirage

FEATHERY FRINGE
I wanted lashes that were delicate, fluttery, and bold all at the same time. Sometimes I like using two sets to achieve this effect, but with Velour’s mink lashes I needed only one.
Velour Lashes - Wire
Velour Lashes Strike a Pose

THE ETHEREAL EFFECT
For added definition, I smudged a metallic brown pencil into the lower lash line, gradually blending it along with my fingertip.
Tom Ford
Eye Defining Pencil
Metallic Mink
Shop Now

EYELASH AMPLIFIER
To tie the look together, I brushed Tom Ford Extreme Mascara onto the lower lashes to balance out the thickness of the top. I love how this mascara offers a soft, yet full effect.
Tom Ford
Extreme Mascara
Ravenous Black
Shop Now

THE BRONZE AND THE GOLD
For a healthy glow, I used the large powder brush to sweep the gold-flecked bronzer onto the forehead and cheekbones.
Tom Ford Beauty
Tom Ford Summer 2015 Limited Edition Large Bronzing Powder
Terra
Shop Now

LIP TO CHEEK
Instead of a traditional blush, I sometimes apply a creamy lipstick to the cheeks for a radiant effect. Apply this pink hue to the apples of the cheeks for a subtle pop of color.
Tom Ford
Lip Color
Pink Dusk
Shop Now

BARE LIP BASICS
I wanted to erase any natural pink in the lips for a more modern look. I used the nude color straight from the bullet and dabbed with my finger to sheer out the intensity.
Tom Ford
Lip Color Shine
Abandon
Shop Now

MAKEUP BY MONIKA BLUNDER
“I am a big believer in energy,” proclaims makeup artist Monika Blunder. “I can feel someone’s energy because I work with so many different types of people. I’m really positive and I try to live my life like that. I don’t like to be around negative people. They just kind of bring me down. I would definitely say I’m optimistic.” The Los Angeles–based, Austria-bred artist is not exaggerating—with more than 20 years in the industry, she has made up a lot of faces, including the flawless ones of devoted clients like Rosie Huntington Whiteley, Jessica Alba, Amanda Seyfried, and Heidi Klum.

Blunder, who views her makeup-given ability to make women feel beautiful almost as a superpower, became enamored of her profession-to-be at age 15, when visiting her director older brother on film sets. “Especially in Austria, where I’m from, makeup is not a profession anyone chooses, and there’s not the right schooling for it,” she explains. Not easily deterred, she enrolled in a makeup school in Germany at 18, then went on to work at a theater in Munich. Later she assisted Norbert Cheminel, an artist who solidified her love for fashion.

When she was 22, Blunder moved to California to work with some of the greats, including Kevyn Aucoin and Paul Starr. But her big break arrived in the supermodel era of the mid-‘90s, when she worked with Rebecca Romijn and Heidi Klum on numerous shoots (including some Sports Illustrated covers). Eventually she met Molly Sims and began doing her makeup for MTV’s House of Style. She has been on the rise ever since.

Lately, Blunder has been dedicated to building her new blog, Highbrow, and her YouTube channel, which boasts more than 130,000 subscribers. “I just started Highbrow, and it’s something I’m going to take in multiple directions,” says Blunder, who is consistently brainstorming new content with cofounder Zoe Brenneke and conceptualizing photo shoots with her husband, photographer Jin-Woo Prensena. And although she feels as if she could have been a baker in another life—she has never bought a birthday cake for her children, instead whipping up fantastical cakes and cookies at home—she couldn’t imagine ever giving up makeup. “I love it too much,” she says. “It’s the best outlet for inspiration.”

prepARE
(your skin)
FOR THE PARTY

A definitive guide to readying your complexion before hitting the town.