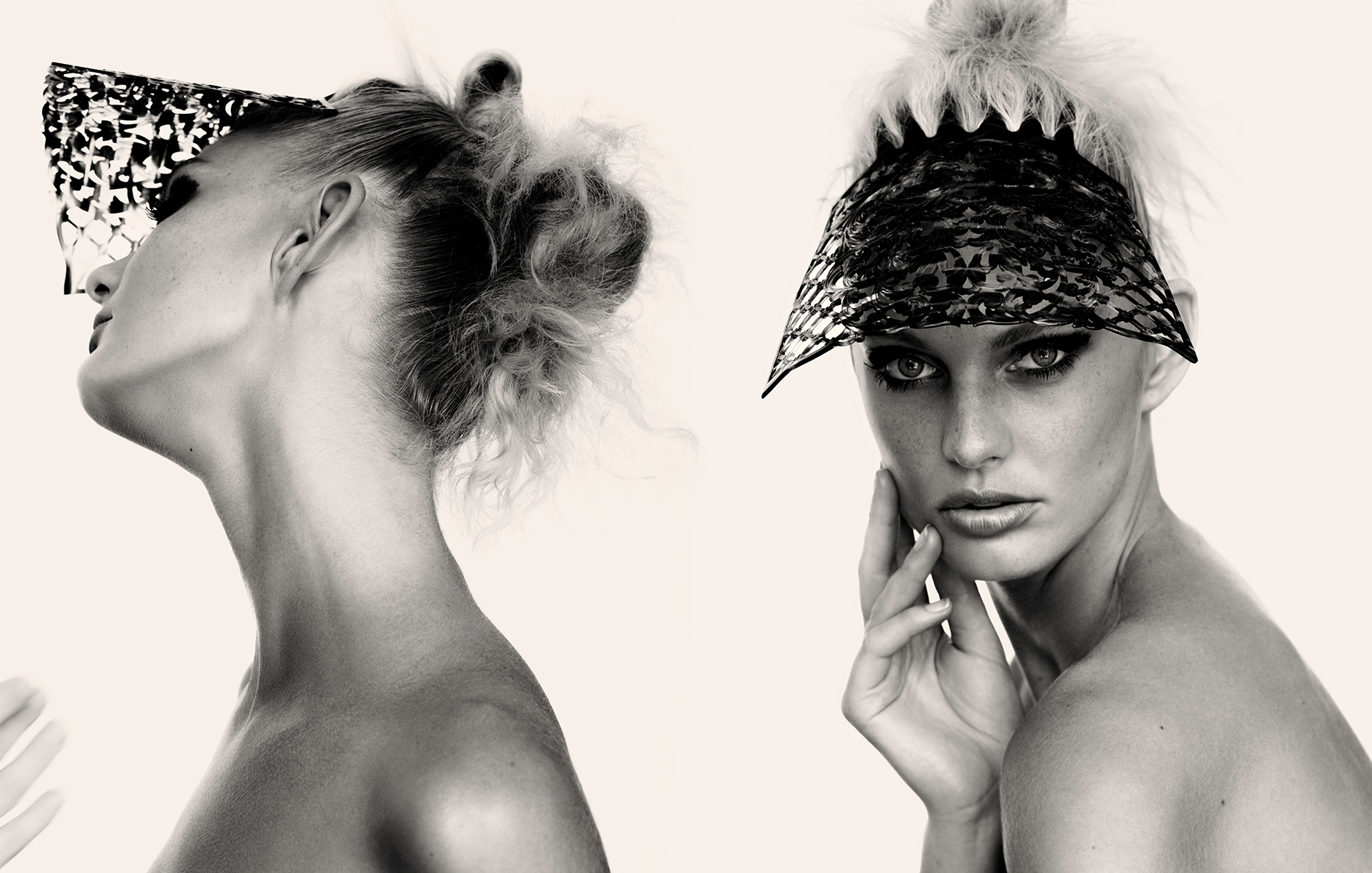 “What I loved about this shoot was that VIOLET GREY gave me a platform to do whatever I wanted,” laughs Neil Moodie of the inspiration behind the images seen here. The celebrated hairstylist, who got his start working with photographer Corinne Day in the ‘90s, has long been an advocate for follicle freedom. You may know him from his work with Burberry, creating its now-iconic relaxed English style under the creative direction of Christopher Bailey. Or perhaps you’re a fan of the Windle & Moodie products that bear his name. “It was great because I had no restrictions in any way,” he continues.

The starting point were the accessories. As Moodie explains, “I’m a huge fan of hair adornments. Working in the fashion industry can be quite restrictive, and I guess I like to experiment a bit.” Moodie is no stranger to collaborations with accessories brands, from his hair jewelry with Me & Ro to his hats with Flora McLean, which have been exhibited at the Victoria & Albert Museum in London. “I really enjoyed it because they don’t know about hair, so mixing jewelry or hats with hair is so different. That was where I really started to explore accessories.” His collaboration with McLean for her House of Flora label was based around iconic hairstyles, like those sported by Grace Jones or Farrah Fawcett. “It just opened my mind to what was outside a ‘regular’ hairstyle. The pieces were originally called ‘hairts,’ but we changed the name to iconic heads because nobody understood it!”

The piece you see here is an oversize comb—typically used to hold up a Spanish mantilla—that Moodie found online and repurposed as a visor. “I found an absolutely giant one, the width of somebody’s head, in beautiful antique tortoiseshell.” When worn on the front of the head, it gives a beautiful alien quality to something so steeped in history.

For the second look, Moodie was inspired by festival style. “But I didn’t want to do a skinny braid with daisies in it. I thought, Well, people tie stuff in their hair, and I thought of Boy George in the ‘80s—those rags he would put in his hair. So I found these chunky pieces of wool and braided them through the hair while also creating an updo.” Evidently, it was all about experimentation. “You know what,” he laughs again, “everything’s been done. But for me, accessories and material are a way to express something different.”

Below, Moodie shares his hair rules for curly hair, talks about flying round the world for Gisele’s silky locks, and explains how he gave Cara Delevingne one of the most copied ‘dos of the decade. 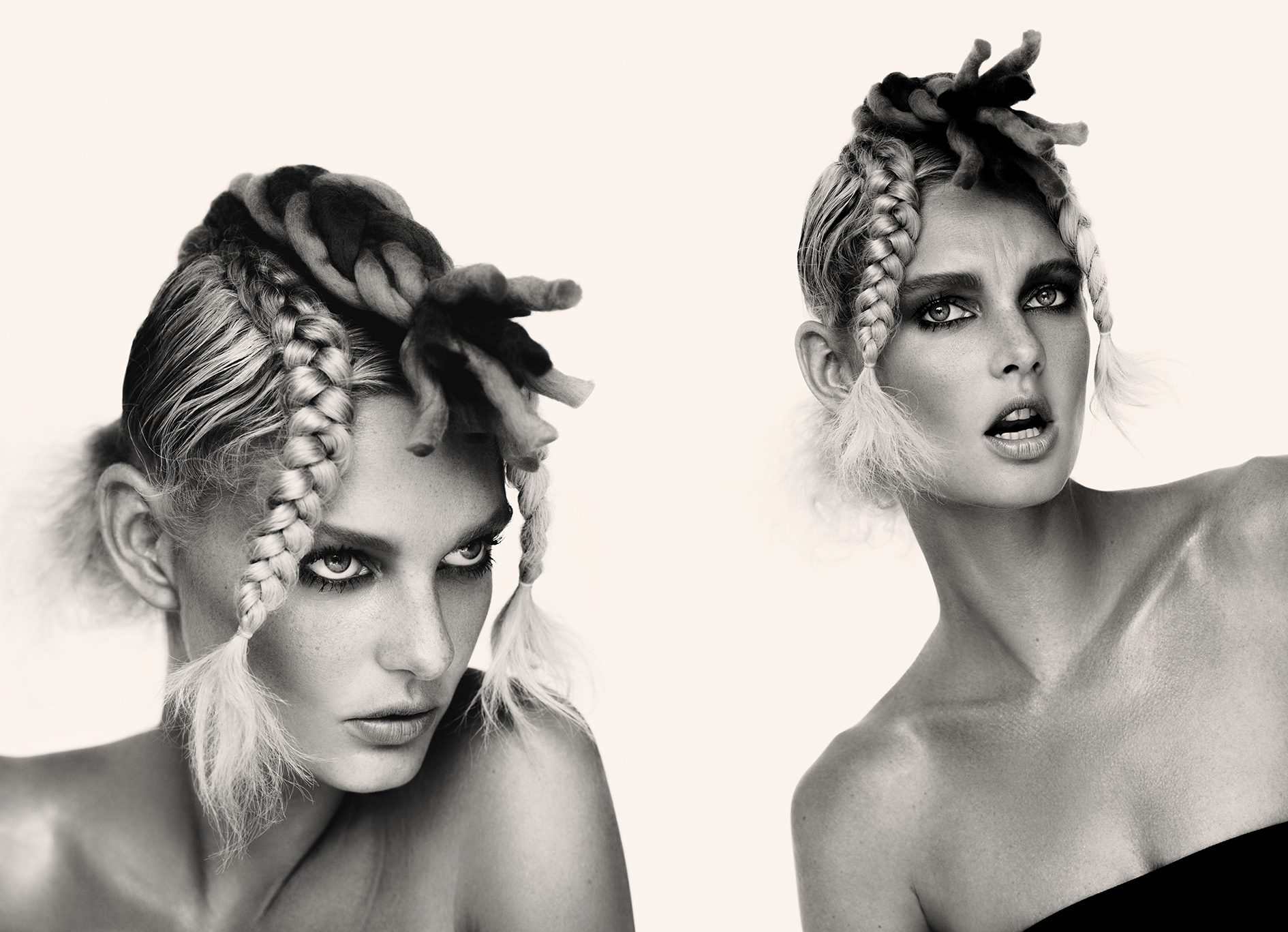 WHAT ARE SOME OF YOUR CAREER HIGHLIGHTS?

1. Working on the hair for a nine-image collage of Kate Moss that is now a permanent fixture in London’s National Portrait Gallery. It was commissioned by the gallery and British Vogue, and the images were taken by my dear friend Corinne Day. This portrait was commissioned to coincide with the launch of the 2007 National Portrait Gallery exhibition Face of Fashion, which featured Day’s work.

2. Working on Cara Delevingne’s first-ever shoot for Burberry. This was actually a beauty shoot to launch their makeup range, and she had never worked on anything like this before. She was chosen to be the face of the brand. This shoot, together with her walking her first runway show for Burberry (which I chiefed the hair on), launched Cara into the world. It felt like a real moment in fashion.

3. Working on Burberry’s first fashion shows in Beijing and Shanghai. Both were pure visual marvels. The one in Beijing incorporated projections of blasting virtual snowflakes and swirling umbrellas. Dozens of models walked across the catwalk while real-time video and generative computer graphics interacted with the models’ movements and clothes, resulting in a hybrid spectacle where the physical and the virtual could hardly be distinguished. It was a mix of holograms of the models as well as real models. The one in Shanghai had 40 models, 80 dancers, Paloma Faith, George Ezra, and Ed Hardcastle performing, with visuals of the London and Shanghai skylines projected on all four walls and the ceiling. It was a theatrical extravaganza set against a British Georgian-style street, with a nod to the 2012 Olympics opening ceremony in London. The finale saw Cara Delevingne—in Burberry beige gabardine and a check umbrella—transform into a hip Mary Poppins and fly above the audience, pulled along by the umbrella.

FAVORITE PEOPLE TO COLLABORATE WITH?

Corinne Day, who sadly passed away of a brain tumor. She was my mentor in the early days of my career, and I worked with her for 14 years. She taught me to think outside of my creative box.

Christopher Bailey from Burberry. When he first asked me to work on the shows—when they moved it to London from Milan—I realized I was being invited to work within one of the most forward-thinking brands of the time. He introduced technology into fashion like never before.

Flora McLean. She opened up my eyes to the endless possibilities of using various materials.

Also: all of the photographers, stylists, makeup artists, manicurists, set designers, and art directors with whom I work regularly. To be able to collaborate with these people is such an honor.

WHAT’S THE FURTHEST YOU’VE GONE FOR A SHOOT?

I was once stuck in a snowstorm in New York, trying to get to LA to shoot a Vogue cover of Gisele. I helped my driver dig us out of the snow on the freeway and we slowly made it to JFK, sliding all over the place. The airport was closing because of bad weather and my flight was cancelled, but I persuaded American Airlines to just put me on the last flight before the airport closed, to anywhere.

I finally made it to Austin, Texas, and from there I booked myself on a flight to LA. I landed in LA at 4 a.m. and was on set by 8 a.m. somewhere on the Californian coast. I just didn’t want to let the team down, because I knew if I didn’t make it they would be without a hairstylist. We only had Gisele for three hours before she had to leave, and I knew I couldn’t be late. To this day, I still don’t know how I made it to LA—pure determination and willpower, I guess.

WHAT ARE YOUR HAIR RULES YOU CAN SHARE WITH US?

1. Don’t attempt to put your hair up if you’ve just shampooed it. The hair is always too clean and slippery. If it feels like that, add some dry shampoo or texture spray to give it some grip and hold. Day-old hair is always best for putting hair up.

2. When putting hair up, use wavy bobby pins. When you're securing the ‘do, cross one wavy pin over the other in the areas you're pinning. This creates a lock on the pins. If you’re using fine hair pins too, bend one side of the pin back into a V shape about a centimeter from the end. This creates a hook on the point so it locks itself into the hair and doesn’t slip out.

3. I have naturally curly hair and am always being asked how to control unruly curls. My biggest tips for getting the best curls are to either diffuse dry or air-dry with a light leave-in conditioner, and be liberal with product. Curly hair lacks moisture and will drink it all up. Layer it with your regular curl product. Once dry, do not brush curly hair. A good solid curl is made up of lots of hairs bonded together. If you brush it, the hairs will break away and look like frizz. Only use your fingers as a comb.

4. Experiment and have fun with your hair! It’s only hair, it grows back...