“Oh, photo shoots are part of my day-to-day life; it’s not something that I mentally have to prepare for in any way,” explains Rosie Huntington-Whiteley. She’s just bared all for VIOLET GREY, in a nude photo shoot set in L.A.’s Pacific Palisades by photographer Ben Hassett. She might as well be talking about carpentry or copyediting, given how matter-of-fact the 27-year-old supermodel, actress and entrepreneur is about taking nude photos. Work, after all, is just work. She pauses and then adds: “Of course, with the nature of more sensual shots or nudity the really important thing is that there’s a close bond of respect and understanding between the photographer and the subject. And so that was what was great working with Ben, because he really took the time and we were off on our own most of the time — there weren’t 20 people standing around staring — and that’s where I find you can get those really special shots, those intimate moments. I think it really shows in the pictures.”
It certainly does. But these days you can’t just photograph well anymore. She is part of a new generation of models, which includes peers such as Cara Delevingne and Karlie Kloss, who aren’t just gorgeous and globe-trotting — they are ambitious. They use their image, personality and millions-strong Instagram following (Rosie’s number is up to 3 million and counting) to build mega-brands in the entertainment, fashion and beauty industries.

It’s no wonder why so many people are eager to learn about Huntington-Whiteley’s life off-camera, since it’s the life most girls dream of having. There’s her devoted partner, fellow Brit Jason Statham; her two adorable dachshunds, Dolly and Peggy; her cadre of supportive friends like Balmain designer Olivier Rousteing, supermodel Candice Swanepoel and VIOLET GREY founder Cassandra Grey. There’s “team Rosie,” a crew of the industry’s leading agents, lawyers and publicists who, along with the multifaceted model, are responsible for the business of being Rosie. “I believe who you surround yourself with is a reflection of yourself. There’s a quote I have always liked by Will Rogers: ‘It takes a lifetime to build a good reputation, but you can lose it in a minute,’” she says.

This year, expect to see Huntington-Whiteley everywhere. She’s in the upcoming postapocalyptic flick Mad Max, which stars Charlize Theron and Tom Hardy. They filmed in Namibia, where she plays one of the five women in a warlord’s captive harem. Even though it’s an action flick, her work on set wasn’t purely physical. “Eve Ensler, who wrote The Vagina Monologues, flew in to work with us on our characters’ backstories. It was a fascinating and emotional experience.” She’s also just debuted a new collection of her lingerie line, Rosie For Autograph, with British retailer Marks & Spencer (“The brand has grown in the last three years from a few dozen items into now hundreds,” she says of the project that requires daily communications with the London-based design team), as well as her very recently launched fragrance by the same name. And the various covers, fashion portfolios and campaigns featuring the recent recipient of Elle UK’s Model of the Year Award just keep coming.

She spends her increasingly rare free time at home. These days that is in the Hollywood Hills, but in just a few weeks she will be moving with Statham into a five-bedroom, $13 million-dollar Beverly Hills abode. When asked what her big goals for 2015 were (decorating is a non-issue, the house was formerly owned and impeccably trussed-up by L.A. clothing designer, Jenni Kayne), Huntington-Whiteley revealed, a bit coyly, that she was ready for more: “Being a model, being an actress — it’s not decided by you. You’re chosen. You’re cast, and that’s fantastic, of course. There is always a sense of pride when you make the cut, but there has always been a big part of me that wants to make things happen for myself. I’d like to get myself into a position where I’m starting something on my own. That’s my focus for this year.”

For now, these photographs for VIOLET GREY take her back to her early days. When asked if she remembers her first nude photo shoot, she laughs and admits she does. “I had just started modeling,” she says. “I was in London, and it was a different time. I honestly think I was a lot more free when I was younger. Kate Moss was my favorite supermodel; she set the standard in terms of nudity as fashion and art. I think being comfortable in one’s skin is the most attractive quality a girl can have. Beauty for me is about a good workout routine — that and a signature scent, preferably one that smells like a garden rose.”
WEAR
LIPSTICK
AND
NOTHING
ELSE
The lipsticks, palettes and spring beauty essentials you do not want to live another day without.
APPROVED BY THE VIOLET CODE
Shop the COver Story 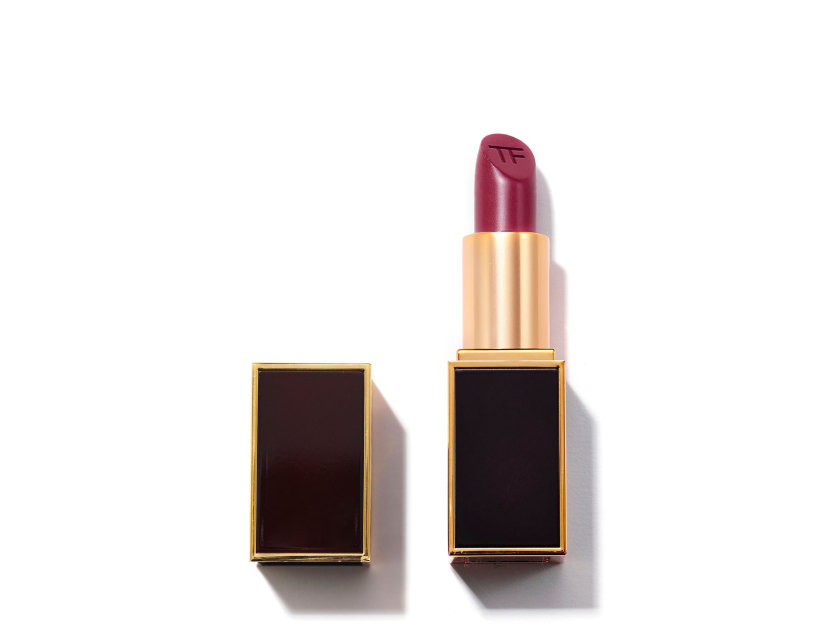 The supermodel opens her little black book of beauty and shares her favorite workout regimens, touch-up essentials and much more.

For SKIN CARE...
Huntington-Whiteley is diligent when it comes to skin maintenance. “If not, I see the difference,” she explains. Her go-to products are by IS CLINICAL, but she calls facialist and good friend Shani Darden her “true skin savior.” “She has a no-nonsense attitude,” says Huntington-Whiteley of the L.A.-based Darden. “You are in and out in an hour, and you are glowing! She has this incredible machine called the LightStim that evaporates any fine lines, acne, scars and dark circles. Her retinol, RESURFACE by Shani Darden, is my favorite product of all time. It leaves skin flawless."
For DAYTIME MAKEUP...
Huntington-Whiteley enjoys looking polished and put-together. It just has to be subtle. “Gone are the days of leaving the house with no makeup on,” she says, with a little sigh. “But I love makeup. I don’t wear a ton of it, but I will always have a little foundation on. I’m a big fan of Chanel Vitalumiere Aqua. It’s a really natural foundation, so it just gives me a simple coverage. Then I put on Laura Mercier Rosebud blush and a little bit of YSL Babydoll mascara and a little bit of Eve Lom lip balm and that suits me for the day, really.”

JEWELRY CREDITS
For STAYING IN SHAPE...
Needless to say, Huntington-Whiteley works out year-round. “I’m a fitness fanatic. It’s where everything starts for me.” Of course, like any human, she, too, has her problem spots. “My bum!” she confesses. “I have really defined muscles in my arms, almost too defined, so I leave them alone completely. But I wish my bum had the same problem.” At the moment, she’s a huge fan of Body by Simone to keep herself toned and taut. “It’s not for the faint of heart! I love it — the music is blasting; it’s kind of my new nightclubbing.” When she travels, she also has her people: her brother Toby at Bulgari Hotel’s Workshop in Knightsbridge and Justin Gelband in New York. “The majority of his clients are Victoria’s Secret Angels, so he’s obviously doing something right.”
“ ”

“I don’t want to be that miserable GIRL pushing a salad around my PLATE.”

JEWELRY CREDITS CREDITS
For MASSAGES...
“I see massage as part of my exercise routine,” the model explains. “I work out quite aggressively, and it’s really important for me to have that time for my body as well.” She likes to have one-on-one sessions with Shelly Bosten, a chiropractor for Hollywood’s action-movie stars. “She has a badass attitude, I love her. We chat, it’s a very therapeutic time, and she clicks me back into shape. Often I’ve got one shoulder up on one ear and one shoulder up on another ear and she kind of straightens me out and aligns me.”

Rosie Also Recommends:
For a Pick-Me-Up After a Flight: Dr. Dennis Gross Alpha Beta Peel pads
For Relaxing at Home: Jo Malone Red Roses Bath Oil
For EATING RIGHT...
Healthy eating is important to Huntington-Whiteley, but she finds it more important to have a positive attitude about what you’re putting in your body. “I try not to beat myself up too much about it. I don’t want to be that miserable girl pushing a salad around my plate. At home, I eat clean, organic, simple. And when I go out with friends, I enjoy myself. Here at home, in the morning, I might have some boiled eggs or sprouts with toast, with a green juice. Or I might have some scrambled eggs with some spinach. Plenty of water through the whole day. And then at lunch and dinner, it’s about a piece of protein, white fish, turkey, chicken. And lots of vegetables. Pretty simple. But, you know, then I’ll go and eat dinner and have loads of roast potatoes at Madeo. And that’s important to me. I love that. I couldn’t live life just restrictive all the time. It’s just no fun to me. That’s not a way to live. It’s all balance.”

For WARDROBE STAPLES...
On her own time, she loves pairing jeans (Paige Denim is a favorite) with a feminine top by Chloé or Isabel Marant. “I always want to be casual and comfortable and stylish and sexy at the same time,” she says. “Young and fun! Effortless! I don’t know if I always strike that balance — but it’s definitely what I’m going for.”
For UNDERPINNINGS...
It may then come as no surprise that Huntington-Whiteley’s lingerie line, Rosie For Autograph, comes from a similar place of wanting to be sexy but comfortable. “I personally believe women — if they can — should wear lingerie that makes them feel good every day. Now, that doesn’t need to be frills and lace all the time, but you can wear a great bra for a dinner with girlfriends under your T-shirt and they see the strap and the nice details. And I certainly think our partners in life appreciate our fashion choices there!”

For EVENING CLUTCH ESSENTIALS...
When Huntington-Whiteley attends an event, she’s not interested in touch-ups. “Most evenings, I like to have a very natural lip color. Dolce Vita by NARS is one of my favorites. I’m a big fan of even lip balm and lip liner. They are the only things I carry in my bag — maybe a compact powder, too. To tell you the truth, I’m not that girl who wants to maintain her makeup throughout the night. I wish I was!”
For INSPIRATION...
When asked if she has any role models, Huntington-Whiteley recalled a trip she took to Cambodia last year with UNICEF: “I was incredibly humbled by who they are and the work they do — they’re doing so much work, so much for others, and it’s selfless.” But she pauses and then adds: “My mum is my role model. Jason’s mum is my role model. I’m describing the people in your life you really know inside and out and you’ve seen them do incredible things and go through ups and downs. Seeing their strength is very inspiring to me.”

“Beauty for me is about a GOOD workout routine — that and a signature SCENT, preferably one that smells like a garden ROSE.”

THE CASE FOR A STATEMENT LIP (STAYING-AT-HOME EDITION)