Inspired by I am a voter., we’re celebrating the women committed to making their voices heard on November 6 and encouraging the rest of us to do the same.

Long lines, crowded polling stations, overhead lighting, the craziness of the workweek—voting often feels like a mundane chore that we have been guilty of skipping because, well, does our one vote really matter? But here’s the thing: it does.

Voting is fundamental to our democracy, but the midterms on November 6 feel different. The I am a voter. organization highlights the fact that voting has become a powerful form of self-expression, and at VIOLET GREY that is always alluring. The incredibly talented Diego Uchitel and our favorite hair and makeup teams were eager to help on this series of portraits celebrating the strength, vulnerability, and authenticity of women voters who have awed us.

Being a voter means being individual and unique, so why not march to the ballot box this Tuesday in an androgynous oversize blazer and a smoky eye? No matter which candidate or legislation you support, in our world there’s nothing cooler—or sexier—than a woman who knows what she wants and takes action to make it happen.

“I wasn’t able to vote in the last presidential election because I wasn’t a citizen yet. The hope I’ve had since then are these midterms: ‘Grab ‘em by the midterms.’ My citizenship came in right after the inauguration, which was kind of bittersweet. The idea that we’ve had as long as I’ve lived in America is that ‘our vote doesn’t matter,’ but if we’ve learned anything from this past election, it’s that our vote fucking matters! It came down to a couple people in different areas that could have swayed the entire election. Each vote matters. It matters.

I like I am a voter. because it’s not telling you what to do. It’s not telling you whom to vote for. It’s just telling you to vote. It’s important that people go out—regardless of whether they vote the way I vote—because they’re going to want to be a part of the conversation. I’m talking to people who have never voted before, who are planning on showing up at a midterm armed with information. It’s incredible, and it’s beautiful to see.”

“I’ve voted in every election since I turned 18. It’s exciting to have an opinion and to cast my vote. It’s a real gift we get as Americans. We’re working together, and the only answer to unrest or frustration is to band together and support the causes we care about. With everything going on, the only answer to being angry is to vote.”

“Our vote is our influence. At the end of the day, we need to utilize more than just our words or posts on social media. The only way to make what we say count is to vote. These elections determine the people who are going to make decisions for our country. It is a privilege and especially vital right now to have a say in who that is going to be. These decisions impact our environment, gun control, education, housing—basic rights that everybody needs. These things need our collective voice and protection, and we do that by voting.

History has shown what happens when we don’t show up to the polls. I want to say to young millennials and first-time voters that taking action matters now more than ever. They are the biggest voting bloc yet and are the future of this country. Their participation is vital because if they don’t make these decisions by voting when their influence is so vast, someone else will do it for them. By not voting they will literally be giving up their tremendous power to weigh in, diminishing their own voice. Their vote is their power, and their power is their impact on all of the issues that enrage and scare them.” 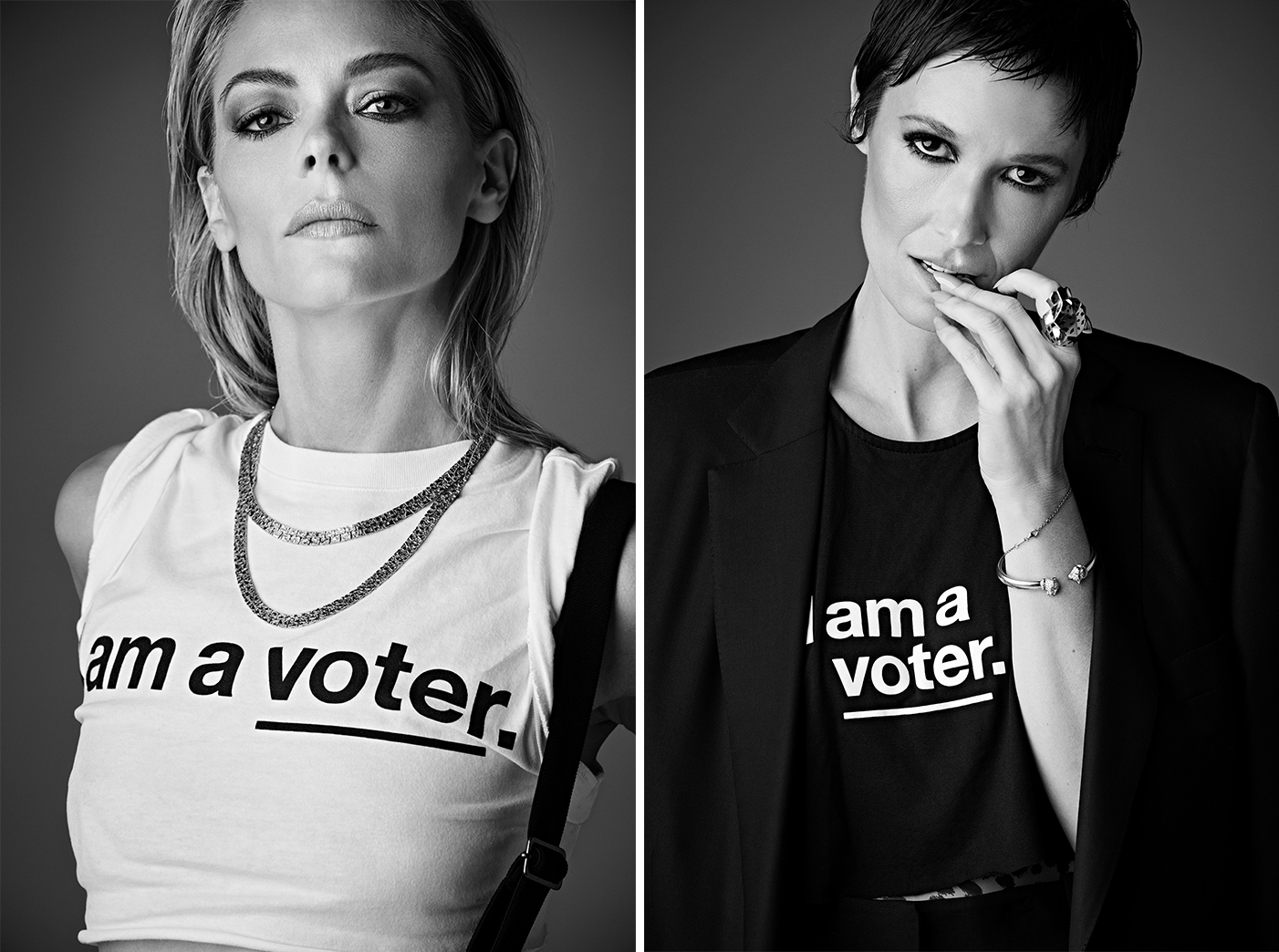 “To me, voting means I have a say in my life and the world we live in. It is something that we can do to really change the world and make it the one that we each want. Regardless of what party line you fall on or who you vote for, it’s important to vote because you have that right, and you should use it. Vote: everyone’s doing it!”

“To me, voting in this election means honoring my children. It means doing my part to know that as a citizen of this country, I am choosing the people who will turn things around, who will be aligned with what I know our future needs. We need people who are going to protect our children, who will protect people of all races, creeds, colors, situations, circumstances, environments; people that will protect our planet, our education, our health care.

The opportunity to vote is such a gift in the first place, now more than ever. To go to that ballot box and tick off the people I want to be in office is doing my civic duty for myself and all of those people who either can’t make it to the ballot box or who are being pushed out by politics. For everyone.

Vote, vote, vote! And when you vote, make it a party. Go with your friends. Make a whole night of it. Make sure you are protecting your future, showing that you have a voice. If you look at the Parkland kids and all the people who have been affected, you have an opportunity to support your community. There’s nothing better than knowing you’ve gone and done this and how good it feels.”

“Voting means you have a voice, a seat at the table to effect change wherever you are passionate. I like I am a voter. because it’s nonpartisan and includes everyone. Right now it feels like we’re voting to have the right to vote. It’s a totally different election than we’ve ever experienced. We’re voting for our freedom, and voting for our lives, and our democracy, and our voice to be heard, and I think that’s pretty cool.”

“I come from two immigrant parents who came to this country seeking asylum from war. My even being an American is a blessing within itself. Voting is a right that I don’t take lightly. I genuinely believe that our future children are going to ask how involved we were in the biggest moments—when there were shootings at synagogues and schools, when babies were being ripped from their mothers at the border. The next generation is going to ask all of us what we were doing, and I want to be as engaged as possible with every opportunity I have.

The I am a voter. campaign is brilliant because it’s not a partisan campaign. It isn’t judging what your belief system is or who you believe in; it’s just saying get involved. Solidify what you believe in and then go vote in support of that.

The beautiful thing about social media and technology is that kids and first-time voters have access to a wealth of information. They don’t have to depend on their parents. They have the tools to research and make decisions for themselves and an empathy and an understanding of others that no previous generation has had. My faith and hope in this new generation of voters is that they will be able to make a significant shift and change in the politicians who are getting voted into office; to not go along with the old, but to have the confidence and the education to know that they can ask for something different. This generation of voters can change the course of our country with their vote if they are all engaged enough to get out and do it.” 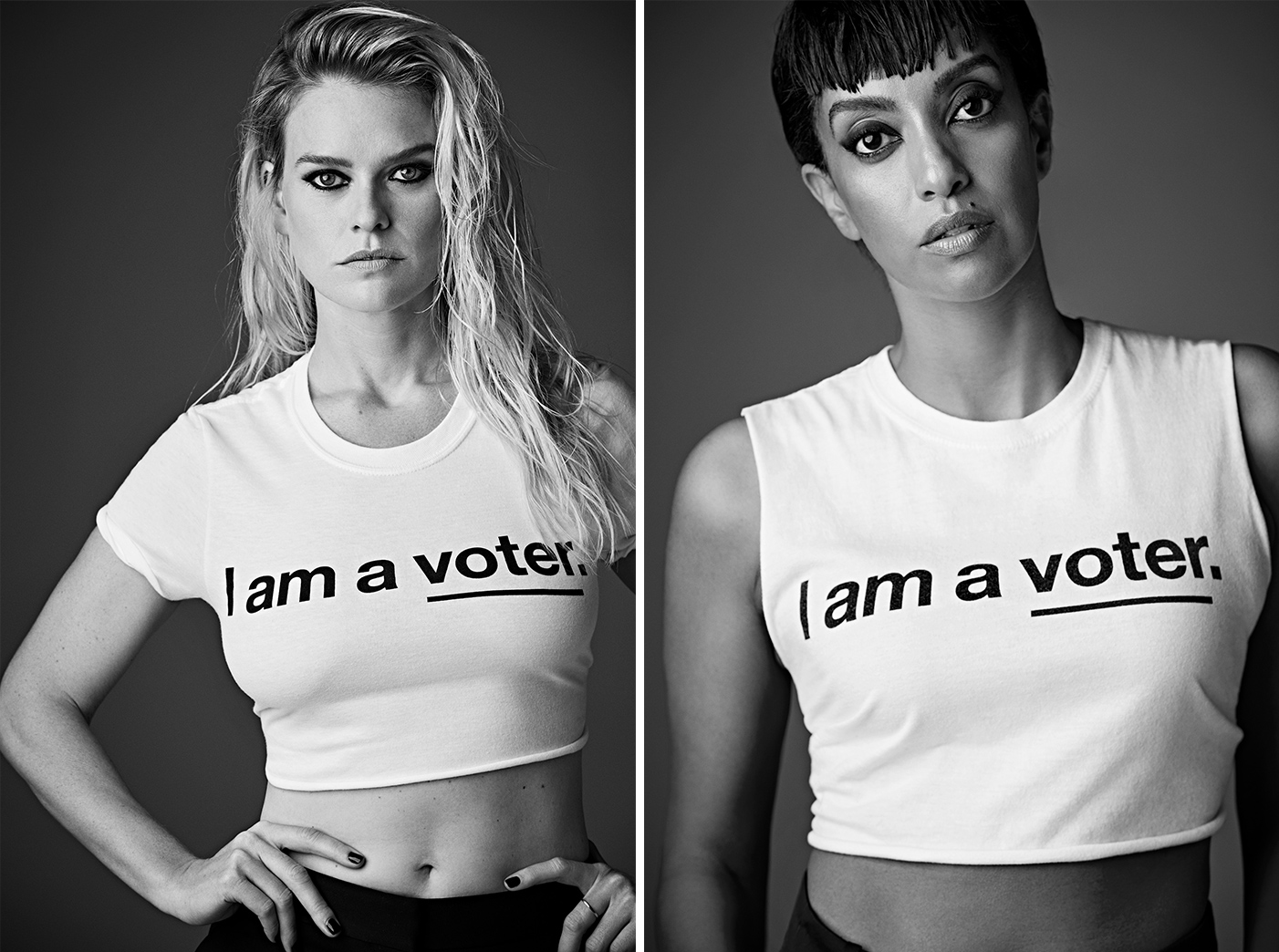 “This is my first time voting in the U.S. because I was not a citizen. In 2016 I found it so distressing watching the campaign and not having a voice. When Trump was speaking so cruelly about women, I thought, This isn’t a country I feel that should be happening in. I don’t feel people should be able to speak about women like that in advanced society. Being for all intents and purposes a participating American, paying my taxes and taking on the cultural woes, I just wanted to have a voice, so I went to an immigration lawyer and took up citizenship. If you believe you have a voice and that your voice makes a difference, then it actually does make a difference.”

“It’s important for those who can to do their part because everyone is impacted. Voting is an act of solidarity. No matter which way we vote, when we participate, we’re all in it together.”

“We’re all affected by the outcome of elections and should take our civic duties more seriously.  You can’t complain about your elected officials if you didn’t participate in selecting them. Getting out to vote now, especially for first time voters, is critical to start taking ownership and understanding the system.”

“I am a voter. I didn’t really understand how powerful that would feel until my first vote. I had just moved to L.A. and turned 18, and I was filming American Pie Presents: Band Camp. I made sure I could get off work early to vote. I wore my blue and red sweater to be very patriotic! My heart was pounding because I realized this isn’t a school test; this is my life and the country I live in, and I’m a part of the decisionmaking. I was emotional. I was standing up for my rights, standing up for what I believe in, standing up for the people I love. I will always remember that feeling. Having the privilege to vote is an honor, and as Americans we can’t take it for granted—especially this time, this election, this moment in our history. Everyone’s voice matters, and I feel like if everyone could feel what I felt that day, everyone would vote.”


Special thanks to all the talent, artists, and Beachwood Studio for being a part of this.