The Oscar-nominated actress is the kind of woman who dives into the pool head first— in an evening dress.
Written By Evelyn Crowley
Photography By Guy Aroch
Makeup By Sabrina Bedrani
Hair By Alex Polillo
Nails By Debbie Leavitt
Styled By Karla Welch 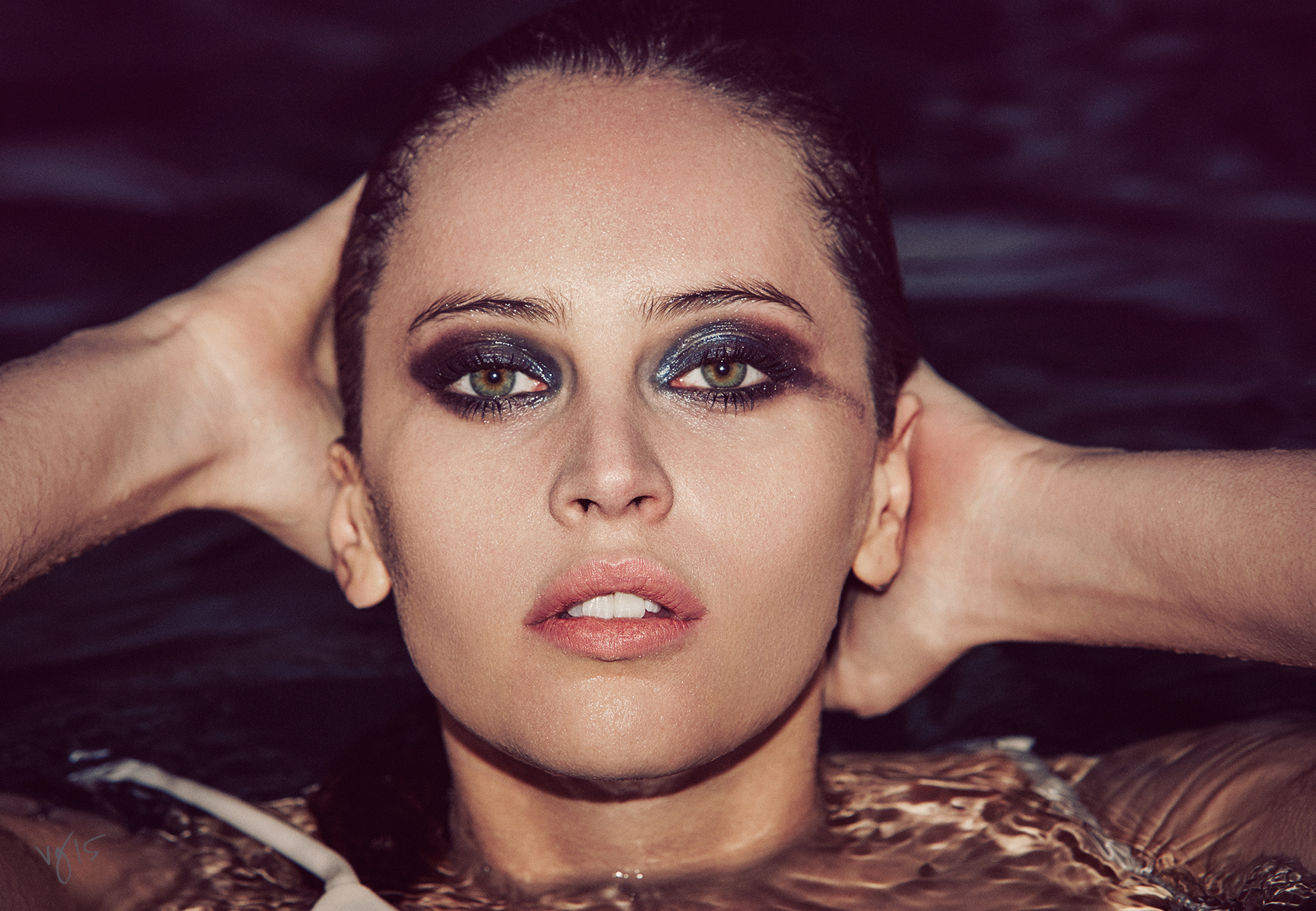 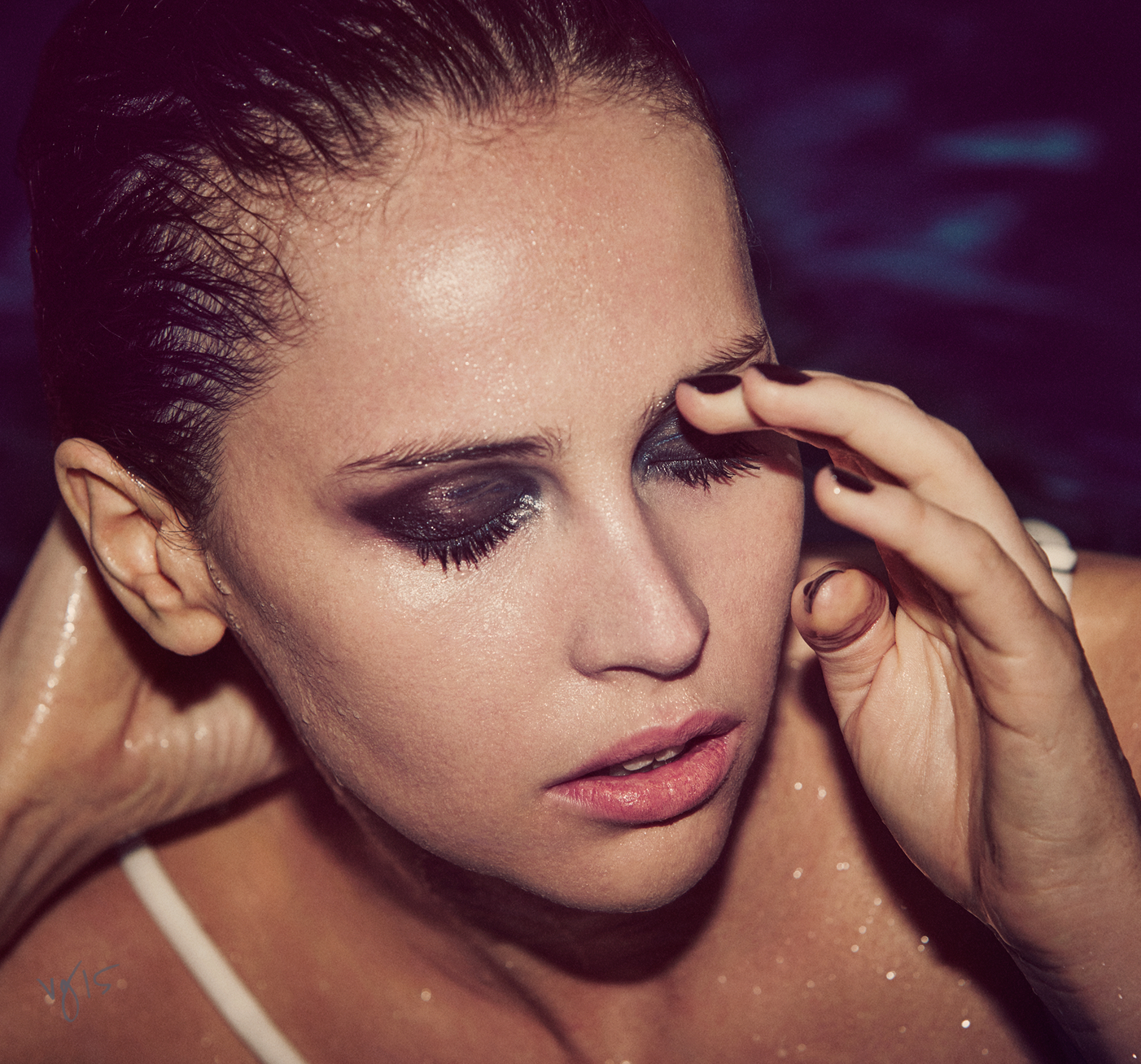 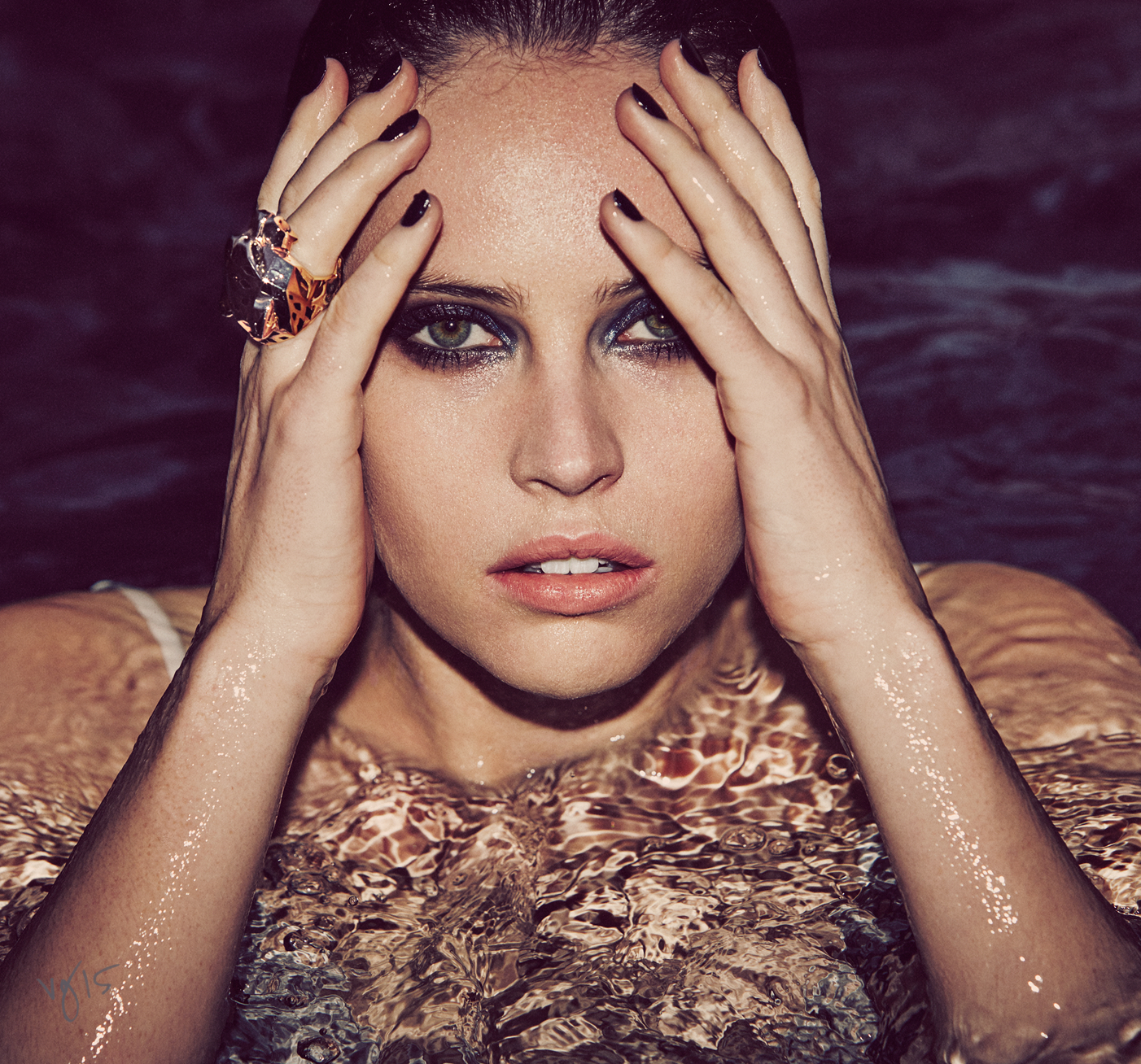 The Iridescent Smoky Eye
BEAUTY CREDITS
FASHION CREDITS
It’s the day of the 2015 Oscar nomination announcements and Felicity Jones is celebrating her Best Actress nod in a most unique way. “I just needed some junk food,” she says, explaining her lunch of Chicken McNuggets and French fries. “I woke up at 4 a.m. and was so nervous I couldn’t get back to sleep. But it’s been a pretty awesome day.”
It’s been a pretty awesome year for the 31-year-old British actress, whose heartfelt, nuanced performance as Jane Wilde Hawking in the Stephen Hawking biopic The Theory of Everything catapulted the promising ingénue into bona fide leading lady territory and earned a bounty of award nominations including a Golden Globe, SAG, BAFTA, Critics’ Choice and, now, Oscar. “I’m constantly having ‘pinch me’ moments,” she says by phone from her Los Angeles hotel room. “I mean, being at the Globes and in the company of Meryl Streep and Robert Downey Jr.? They are icons of cinema!”

On the set of her cover story photo shoot for The Violet Files, Jones provided a glimpse of her immense talent when she channeled a forlorn Hollywood damsel for creative director Cassandra Huysentruyt Grey, founder of VIOLET GREY, and photographer Guy Aroch’s lens. “We had this idea that maybe she’d had an argument with her lover and now she’s back at her L.A. pad and going over the evening in her head,” says Jones, who slipped into character with typical ease. “So there’s something distracted about her.”

The shoot took place at a sprawling Hollywood Hills home on an uncharacteristically brisk Southern California day. Shortly after sundown, Aroch asked Jones (who’d already been in the pool once) if she wouldn’t mind going for another dip. Ever the professional, the actress slipped back into her wet gown and gamely waded into the freezing water. “If I’m doing something I like to do it properly,” she explains. “When you’re working with great people then you have to give it everything.”

Born in suburban Birmingham, England, Jones began acting when she was 11 on the BBC kids’ TV show The Worst Witch. She soon graduated to soapier fare playing the high-spirited Emma Carter on the BBC radio melodrama The Archers while pursuing an english degree at Oxford University. Upon graduation she embarked on a string of critically acclaimed roles that ranged from Shakespearean (as the chaste Miranda in a 2010 adaptation of The Tempest) to shoestring budget (her turn as the lovelorn Anna in Like Crazy won the 2011 Special Jury Prize for acting at Sundance).

She was initially hesitant to sign on to The Theory of Everything, wary of those “just the wife” parts that abound in Hollywood. However, she changed her mind after reading the script, an adaptation of Jane Wilde Hawking’s best-selling 2007 memoir, Traveling to Infinity: My Life with Stephen, which explores the author’s relationship with ex-husband, theoretical physicist Stephen Hawking, who was diagnosed with motor neuron disease shortly after they met. “I found Jane both complicated and incredibly courageous,” says Jones, whose onscreen chemistry with co-star Eddie Redmayne helped earn the film an Oscar nomination for Best Picture.

In person, it’s easy to understand why, in 2012, Dolce & Gabbana tapped Jones as the face of their makeup line. With her limpid green eyes and English rose complexion, the actress possesses a delicate beauty as well as a to-the-manor-born elegance. While she may look like she stepped out of the pages of Middlemarch, her tastes are refreshingly relatable. Aside from her aforementioned McDonald’s weakness, she cites Britney Spears’ “(Hit Me) Baby One More Time” as her favorite shower song (we had to ask) and dutifully keeps up with the Kardashians. “Watching their show is so relaxing,” she says. “It’s how I switch off. And they all have an incredible work ethic, don’t they?”

Although The Academy Awards are still a month away, Jones has little time to bask in the moment. She’s currently finishing shooting an adaptation of Partick Ness’ children’s book A Monster Calls and is set to start filming The Da Vinci Code sequel, Inferno, with Tom Hanks this spring. In the meantime, of course, there’s the gauntlet of red-carpet events that accompany awards season. “I can now walk in five-inch heels, which is something I never thought I’d be able to do,” says the 5-foot-3 actress. “Under my dresses, literally, I’m on stilts.”

1
WHAT WOULD YOUR CHARACTER IN THE THEORY OF EVERYTHING SMELL LIKE?

Flowers in the meadow. She has an earthiness and simplicity of presence.
2
IN WHAT CITY DO YOU FEEL MOST BEAUTIFUL?

In Paris or Barcelona you feel your sexuality just from being female. It’s something England and America should definitely adopt.

The Domestic Cat Eye
BEAUTY CREDITS
FASHION CREDITS
3
DO YOU BELIEVE IN MAGIC OR WITCHCRAFT?

I like to think there are things we can’t explain. It makes life a bit more exciting.
4
WHO IN HOLLYWOOD WOULD GIVE THE BEST ROMANTIC ADVICE?

God, I don’t know. I think you’ve always got to get romantic advice from your close friends.
5
YOU MEAN NOT A COMPLETE STRANGER WHO HAPPENS TO BE AN A-LIST ACTOR?

[Laughs] Exactly. I don’t think they’d be the best judge of your romantic situation.

In Paris and Barcelona you feel your SEXUALITY
just from being female. It’s something England and America should definitely
adopt.

Notting Hill. I love that movie. And I couldn’t stop crying when I watched Blue Valentine. It was so moving and emotional.