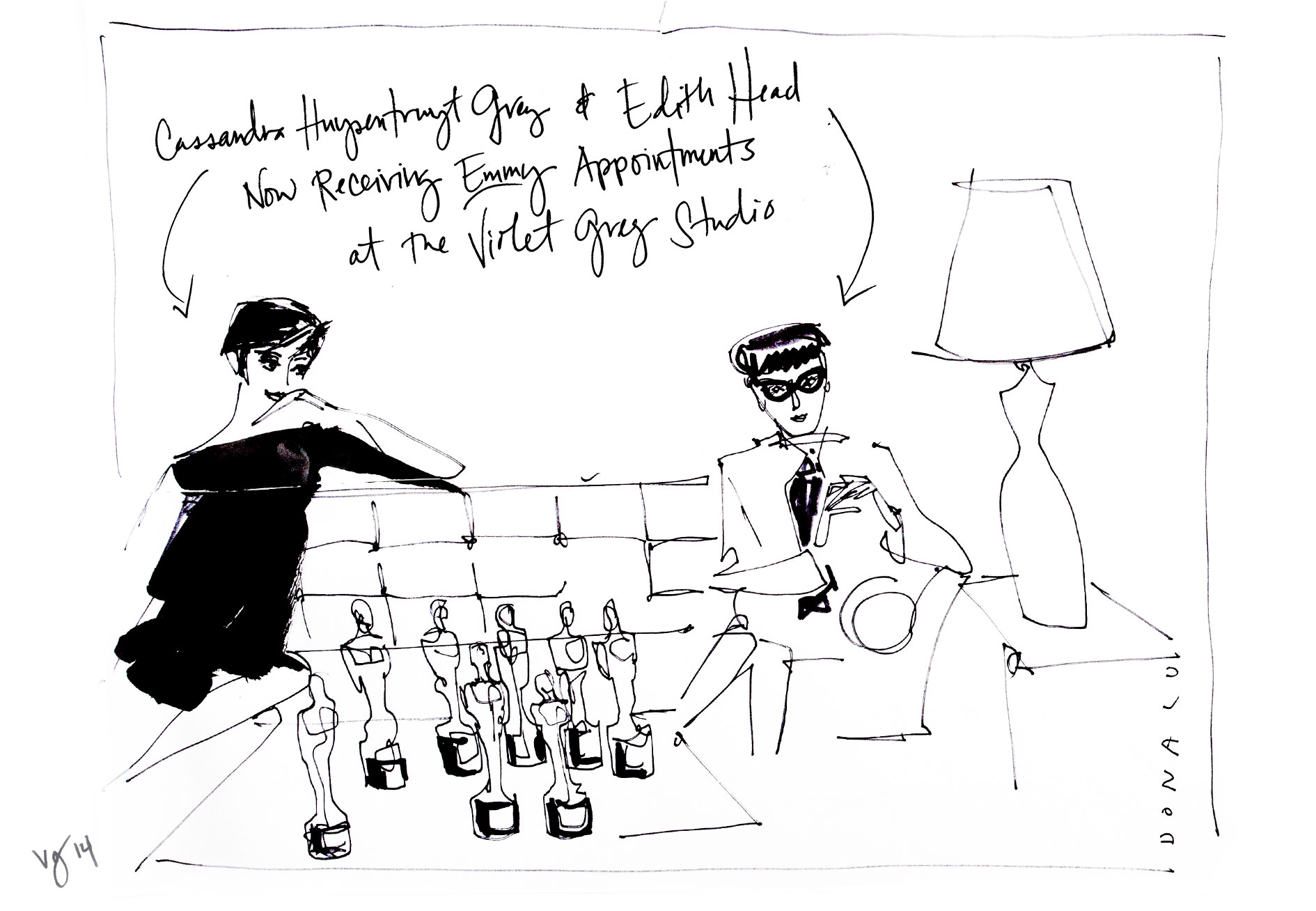 Los Angeles is full of buried artifacts from classic Hollywood. Consider the lost sketches of legendary costume designer Edith Head. When VIOLET GREY founder Cassandra Huysentruyt Grey stumbled across them in the Paramount Pictures archives, she felt instantly inspired. Her friend Donald Robertson was equally delighted. An illustrator himself, the Estée Lauder special products guru is known for the witty, pop-culture-inspired sketches which have earned him collaborations with fashion world luminaries such as Carine Roitfeld and British designer, Giles Deacon (not to mention a devoted Instagram following under the pen name @donalddrawbertson).
Donald first encountered Head’s drawings when he visited the VIOLET GREY Melrose Place studio earlier this spring with Cassandra. When he walked into the application room, Head’s miniature dress sketches that adorn the silk paper walls caught his eye, while a larger illustration of costume sketches for Funny Girl (1968) in the larger salon captured his attention. The illustrator knew right then that he had found his new muse.

Certainly, Head is a worthy subject to worship. The eight-time Academy Award winner presided over Paramount’s wardrobe department from 1924 to 1967 and her services were sought after by virtually every leading lady of the day, from Bette Davis, Audrey Hepburn and Elizabeth Taylor to Hitchcock heroines like Grace Kelly and Kim Novak. She was known for her scrupulous attention to detail (screen tests or what she called “personality tests” would be conducted just to capture an actress’ movements and posture) and pithy style edicts like “A dress should be tight enough to show you're a woman and loose enough to prove you're a lady.”

For his inaugural file as a VIOLET GREY Artist in Residence, Robertson dashed off an exclusive series of drawings for both the studio on Melrose Place and this month's cover story that depict Head doling out style inspiration to some of this year’s Emmy-nominated actresses. “It’s easy to draw people if you zero in on one thing,” he explained, when asked of his lighting fast speed. “For instance, Kerry Washington: mouth, Julianna Margulies: black hair. Robin Wright: nose. She has a great, not-perfect nose.”

As for Head, Robertson focused on her signature blunt cut, governess-style bangs and Coke-bottle glasses. Afterward, he hinted that the late designer might become a recurring character in his repertoire. “The few pictures I have posted of her, just as a test, oh my god, people go crazy. They really love her.”

Tongue firmly in cheek, Donald envisions what Edith might have to say to this year's Emmy nominees on the subject of style.

Growing old gracefully used to begin at
about 35, but today women prefer to
stay young
gratefully
with thanks to designers,
beauticians and plastic surgeons.

ART OF THE WEEKEND