The supermodel transforms into a fugitive-on-the-run for a cinematic shoot in a movie studio back lot.
Written By Christine Lennon
Photography By Emma Summerton
Makeup By Dotti
Hair By Serge Normant
Nails By Marisa Carmichael
Styled By Sally Lyndley 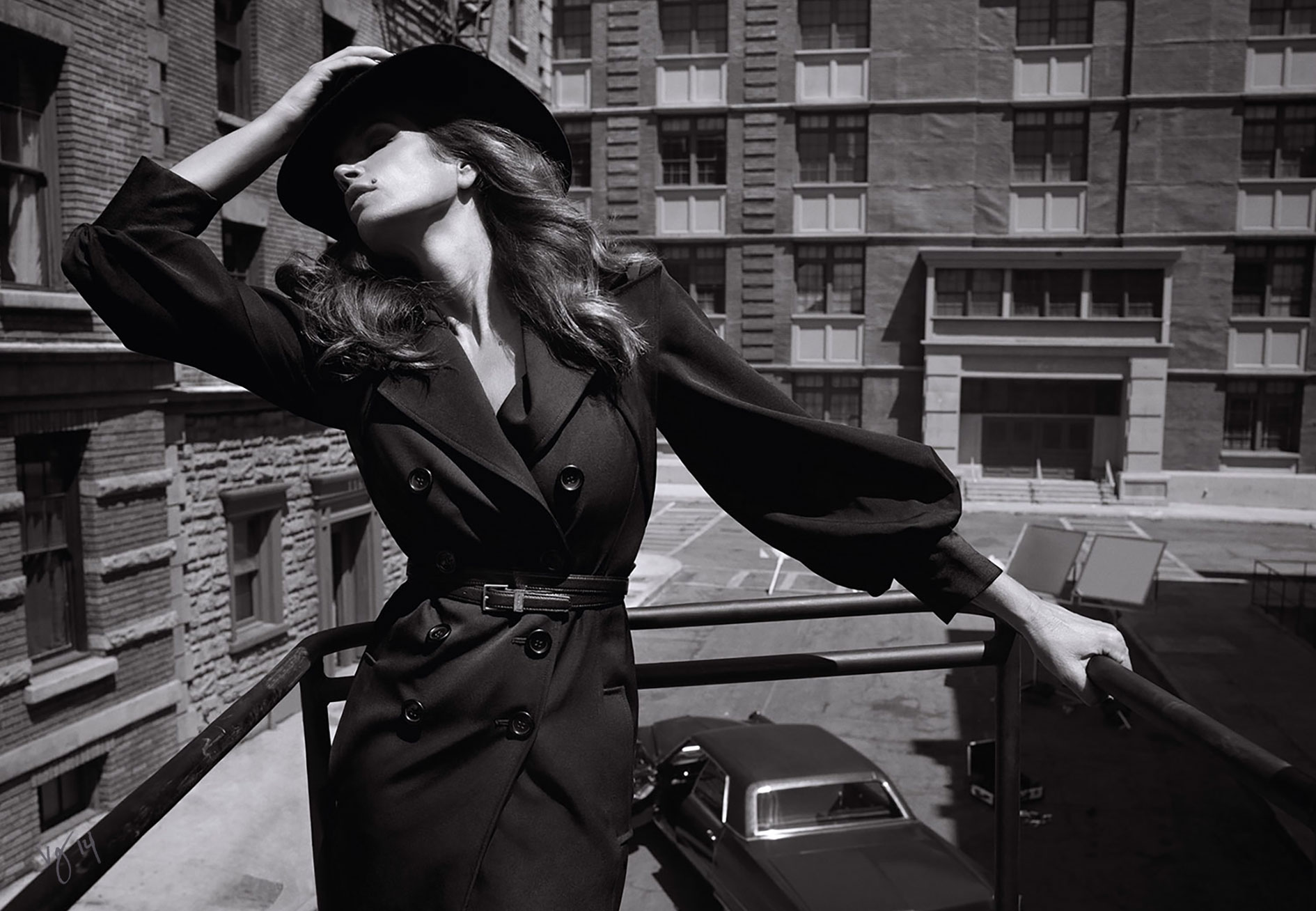 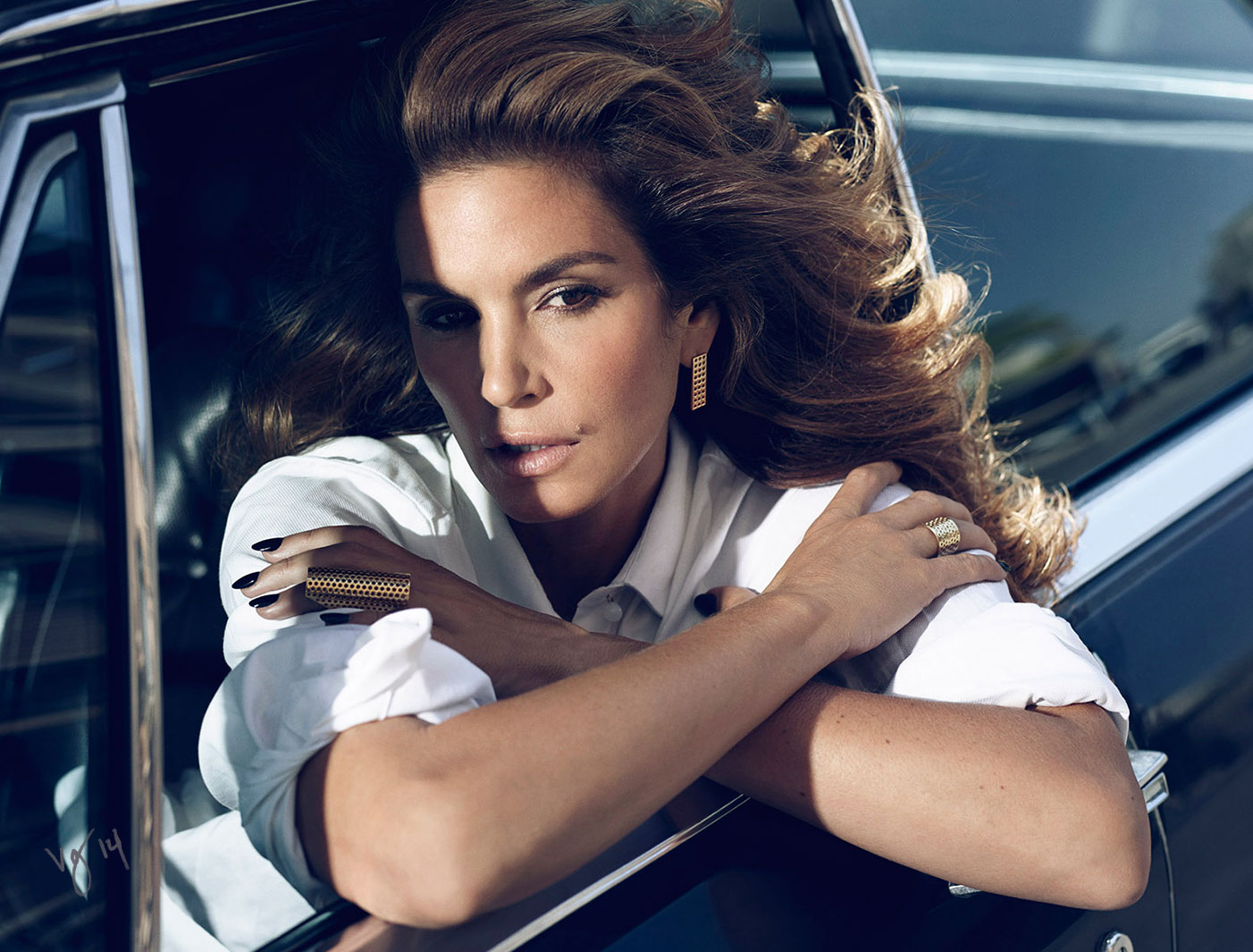 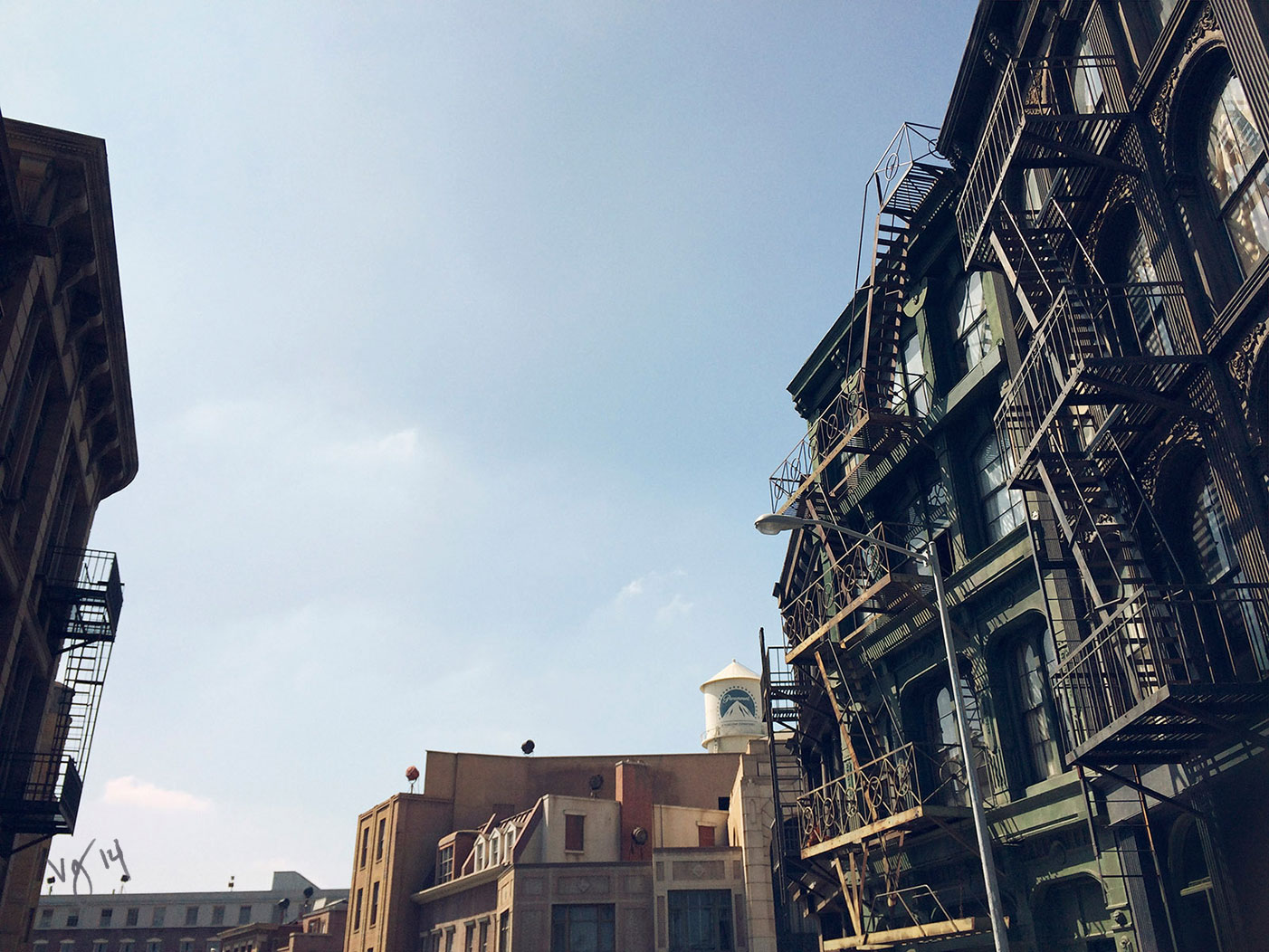 One of the most memorable moments from House of Style, the influential MTV fashion-news show that aired in the early ’90s, was a behind-the-scenes video featuring the host, Cindy Crawford, on an American Vogue shoot in Monte Carlo with photographer Helmut Newton. In the clip, the provocative lensman, who looked like your dapper uncle from Palm Beach in a Hawaiian-print shirt, instructs Cindy (wearing only towering stilettos, a white, plunging tank suit and deep-red lipstick) to writhe on the floor in front of a blindfolded cellist, as if she were the guest at an elegant, Louis XIV–era orgy. “I knew that if I was showing up for a day shooting with Helmut, I was going to be paddled,” says Cindy, in her matter-of-fact way, by phone from the house she shares in Malibu with her husband, restauranteur Rande Gerber, and their teenage children, Presley and Kaia.
Nearly 25 years later on the set of the VIOLET GREY photo shoot in Los Angeles, Cindy is still every bit the consummate professional, game to climb atop cherry pickers and don wool suits under the California sun in the name of a beautiful photograph — and look amazing doing it.

The supermodel, who turns 50 next year and is celebrating the occasion with a Rizzoli book of photos and essays from her storied and lengthy career, was the original “Model, Inc.” And by that we mean she was a pioneer of the branding era. She attached her name to delightfully retro workout videos with Romanian celebrity trainer Radu, a skin-care collection (Meaningful Beauty by Cindy Crawford) and a line of furnishings (Cindy Crawford Home). She was also the first to teleport into living rooms across the country, delivering style missives with her signature Midwestern accent and a wholesome directness through the MTV show. She pulled back the curtain on the clandestine workings of the high-end fashion world and introduced the eccentric personalities within it to a wider audience. She had those dark features and a memorable mole; a strong, athletic sexiness; and, counter to the reputation of her peers back in the day, she seemed grounded and, well, nice.

“I was lucky because House of Style was like my Twitter,” she says, with a laugh. “I got to be more than just a picture. Because of social media, so many of the girls today, like Coco Rocha, Lily Aldridge, Georgia May Jagger and Cara Delevingne, are brand-building. When I started modeling there was no language for that.”  Her MTV gig wasn’t the only thing that differentiated the Illinois native from the pack. While some of the other “supers” were sipping Cristal and stalking the runways in Paris, Cindy was following a different path.“Fortunately, we weren’t expected to be a size 0 or 2 in my era. Christy and Linda and I, we weren’t so tiny. But I was still voluptuous even in that group. Sometimes it was hard at the fashion shows,” she says. “But because of the way my body was, I had some different opportunities, like my swimsuit calendars.”’’

Photographers like the late Herb Ritts, who was known for shooting serene black-and-white images on the beach in Malibu, drew the young model west to Los Angeles. It was at Ritts’ house where she met actor, ’80s-era heartthrob and future husband, actor Richard Gere, when she was just 21 (he was 38). She and Gere were fixtures on the red carpet in the mid-'90s, and a particularly revealing red Versace dress she wore in ’94 regularly makes all-time-best lists during Oscar season. The pair divorced in ’95, Cindy remarried in 1998, and the once bicoastal model put roots down in Malibu. It’s the ideal place for a woman who has spent the better part of her professional life in a tank suit in front of a camera and who feels most comfortable in jeans and minimal makeup. On set for her VIOLET GREY shoot on the back lot of Paramount Pictures, Cindy revisited her Helmut Newton days with a menswear-inspired, gender-bending wardrobe and tousled, unapologetically sexy hair (courtesy of stylist Serge Normant). “It felt like we were doing old Hollywood film stills,” she said afterward. “It was fun, and it was comfortable. I don’t always get to wear gigantic pants.”

SHE KNOWS HOW TO TAKE CARE OF HER SKIN, AND IT SHOWS.
“I’ve been getting microdermabrasion facials with Cristina Radu for 13 years, and that’s been great for my skin. I’ve been working with the dermatologist Jean-Louis Sebagh on my skin-care line — also for 13 years — and he knows what he’s doing. Dr. Sebagh is not about damaging your skin with lasers and peels to make it look better. I use SPF day cream every day, cleanser every day and night. I definitely use the night cream, eye cream and the Crème de Serum from my line. What I think is true is that [results are] cumulative. When a 35-year-old starts taking care of her skin, she won’t look different. It’s when you’re my age that you start seeing the payoff.”
SHE LIKES TO HONOR A MILESTONE BIRTHDAY.
“I thought that writing a book, compiling photos and writing essays about my experiences may be an interesting way to turn 50. It’s probably what we all should do on our birthdays, to take a look back to examine our lives. I’m just doing it more publicly. When you’re in the middle of something you can’t see as clearly, so…it’s been a great journey for me to look back and reflect.”
SHE LIKES TO KEEP THINGS SIMPLE WITH HER LOOK.
“My friend makeup artist Sonia Kashuk makes this eye-shadow palette with 16 different shades of brown, and we laugh because it’s perfect for me. I’ll comb my eyebrows [and] put on some mascara and maybe a little lipgloss if I’m going out.”

I knew that
if I was showing up
for a day shooting with  Helmut,
I was going to be paddled.

— Cindy Crawford, Supermodel
Tweet This
SHE’S QUITE COMFORTABLE IN THE BUFF.
“I remember when I shot that Michael Thompson cover for W when I was pregnant with my son. It’s funny because the intention was not to do nudes. It just looked better without clothes. Michael is a real family guy, so he understood how I was feeling. It’s hard when you’re modeling your whole life and your body changes like that. It’s scary. Doing that shoot was a way to help me transition. I remember my publicist showed up on set and saying, “You can’t even keep your clothes on when you’re pregnant!”
SHE GIVES SAGE ADVICE ON HOW TO AGE WITH GRACE.
“I don’t want to look in the mirror every day and be down on myself. Look, I’m holding together pretty good, but I don’t look like I did when I was 25 or 30 or even 40. What I’m finding for myself is that if I continue to be engaged, to do what I love, that’s how I get my self-esteem cup filled. I get a lot of that from my family and work. I’m good at my job. I know I’m a good model at this point in my career. Though some days I feel like I’m too busy or too stressed out, I’m still excited to go to work. That kind of translates from the internal to the external. The secret is that there’s no secret. Do all the stuff we know: Don’t smoke, get enough sleep, drink plenty of water, find what makes you happy.”
SOMETIMES SHE MISSES THE ’90S.
“Remember back in the ’90s when people thought a big bowl of pasta was a low-calorie option? Those were the days! Today, eating that is like eating a sundae.”

SHE WANTS YOU TO KNOW THAT HAIR AGES, TOO.
“No one tells you about your hair! You don’t expect the texture to change and that it will break more easily. I’m definitely kinder to it now. I don’t wash and dry it every day. I try to make a blow-dry last. If I work out, I’ll pin it up in a top knot so I don’t get dents in it. I’ll sleep with it pinned up. There’s a jasmine hair mask from Lush that I love. You put it on before you wash your hair, before you get in the shower. With regular masks they say to wash your hair and then leave it on for 10 minutes. What am I doing waiting naked in the shower with a 10-minute hair mask on? It doesn’t make any sense.”
HER MINI-ME, KAIA, KEEPS HER UP ON THE LATEST MODELS.
“I have a 13-year-old daughter, and she keeps me up on things like this. I like the girls who look like they have real personalities, like they’re people I would want to meet. Georgia May Jagger is one I like to watch. Her pictures are beautiful but also interesting.”
HER RECIPE FOR SUCCESS:
“I reach out to my friend (acupuncturist, herbalist and certified Chinese nutritionist) Neka Pasquale to get ideas about nutrition and wellness. Every morning I make a smoothie that’s based on her chocolate-mint shake: I put almond milk, spinach, fresh mint, cacao nibs, and half a frozen banana in a blender, and I add a few extras like green powder and extra protein powder. It’s delicious and doesn’t make me feel bloated. I can work out, go to work and feel good when I drink it.”

When a 35-year-old starts taking care of her skin, she won’t look different. It’s when you’re my age that you start seeing the payoff.

Meet the stylist responsible for Cindy's voluminous and sultry curls.