The actress seamlessly transforms into six different characters for a series of before-and-after
beauty tests for The Violet Files.
Photography By Alex caYley
Written By Evelyn Crowley
Makeup By rachel goodwin
Hair By Mara roszak
Nails by karen gutierrez
Styled By Elizabeth Stewart 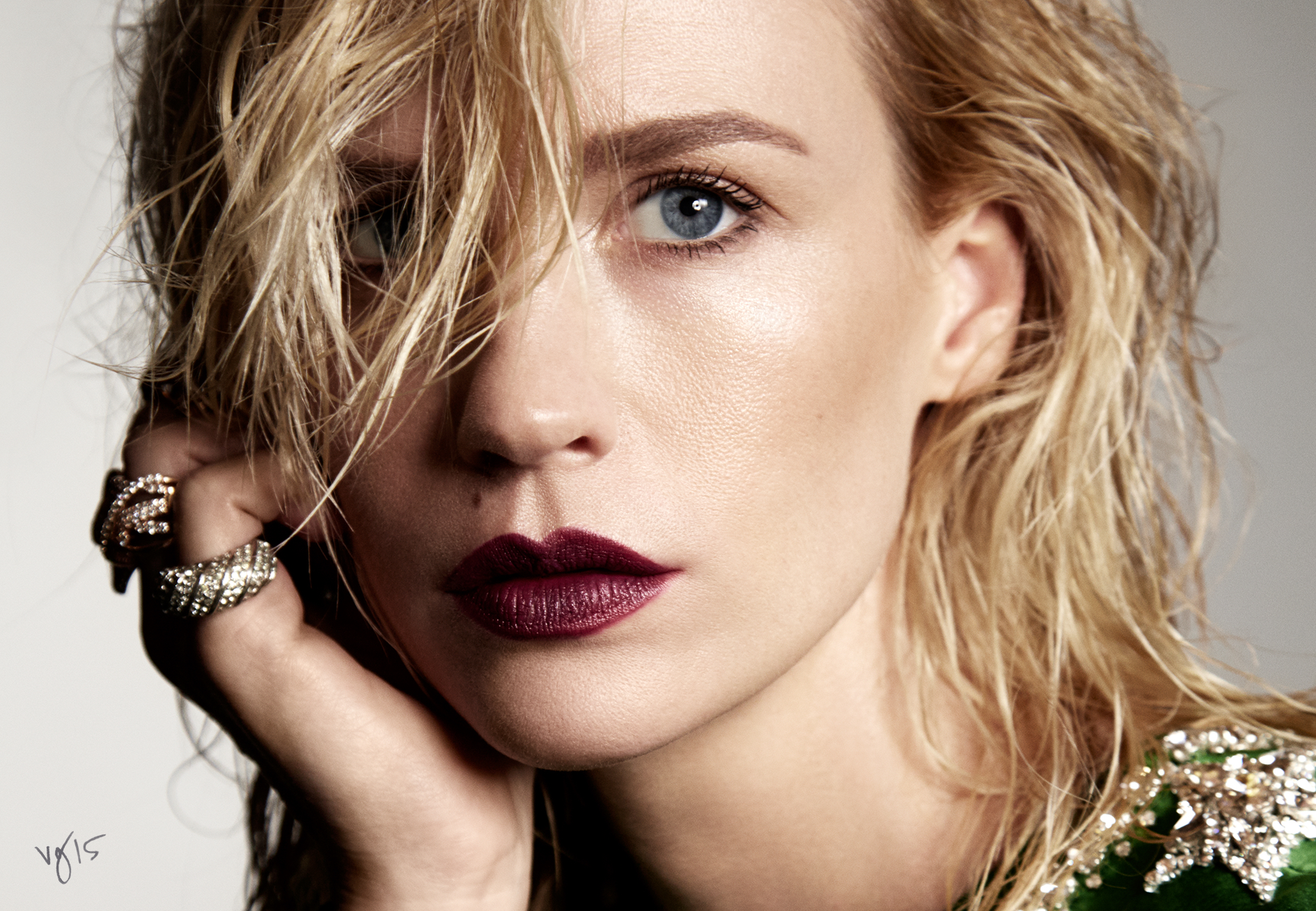 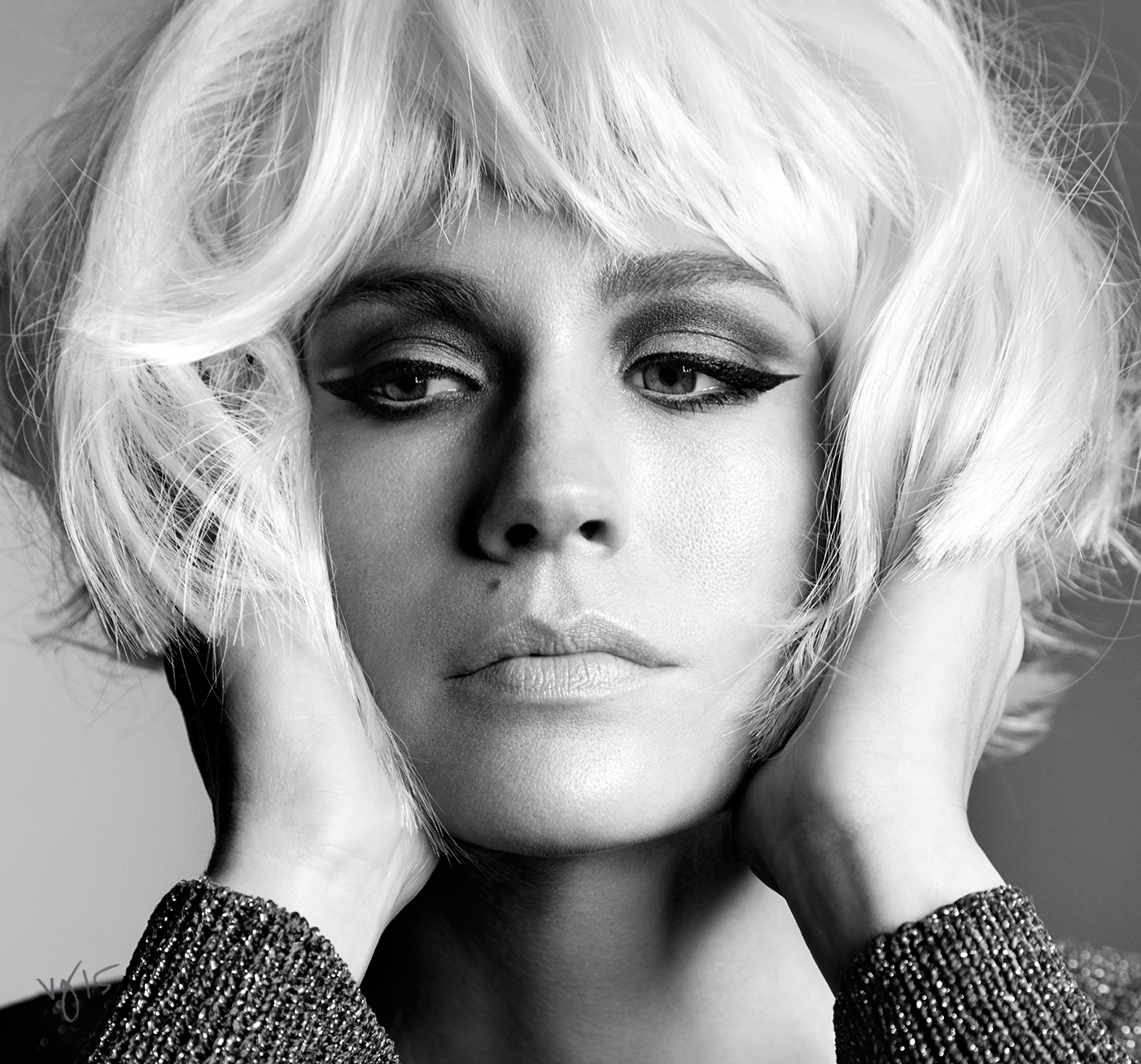 For her VIOLET GREY cover story, January Jones set out to prove she’s not just a pretty face.

At the very least, she is six pretty faces.

In an inventive collaboration with hairstylist Mara Roszak and longtime makeup artist Rachel Goodwin on set in Los Angeles, the 37-year-old actress barreled through a half-dozen looks (a chunky fishtail braid and strong brow, a retro bouffant and winged cat eye) in the span of a few hours. “We wanted to do an elevated take on before-and-after photos and explore the idea that a lot of women, myself included, feel less vulnerable once they’re dressed and have their makeup on,” says Jones, who cites a good pair of heels and red lip as her personal go-tos. “It’s like you’ve put your armor on for the day.”
For a shoot that delves into transformation and role play, VIOLET GREY couldn’t have cast a more fitting subject. This spring, television audiences will find Jones inhabiting two characters that are utter opposites (save for an enviable shade of blonde). Beginning April 5, she’ll reprise her role as ’60s housewife Betty Draper Francis on the eighth and final season of AMC’s Mad Men, which contains plot twists that were shocking even to cast members. “I was surprised,” says Jones of the much-anticipated series finale. “But the show has always surprised me. Each episode is so good and sort of ties up things — not in a perfect bow, obviously — but I think the audience will be happy.”

With a few clicks of the remote down to Fox, viewers may have caught Jones playing the straight woman to co-stars Will Forte and Kristen Schaal in the Sunday post-apocalypse comedy Last Man on Earth. “It was so enjoyable to go to work and just laugh all day long,” says Jones. This May, audiences can also see her in a big-screen thriller, The Good Kill, which co-stars Ethan Hawke.

Though Jones has received accolades for her portrayal of the frosty yet temperamental Betty, off screen the actress — an active environmentalist, Oceana spokesperson and mother to 3-year-old son Xander — more resembles her Last Man on Earth character, the world-wise Melissa. “She’s a pretty cool chick,” says Jones. “Independent and super modern.” To wit, she has pretty much mastered the art of the Instragram #TBT (a fact duly recognized by BuzzFeed). “I was at my most confident as a kid,” explains Jones, who once posted a photo of herself at age 9 with a mullet. “It actually wasn’t until I got into high school and started to get quote-unquote pretty that my confidence started to disappear. So I want to give the message that girls can be proud and self-assured no matter what funky haircut they have.”

“I feel sexy and vulnerable when I have no makeup on.”
—JANUARY JONES, ACTRESS

“Red lips have a way of making a woman feel and look powerful. They are an unapologetic declaration of her self-confidence. They say ‘go away’ and ‘look at me’ at the same time.”
—RACHEL GOODWIN, MAKEUP ARTIST

“The makeup has a strength to it — the eyes and cheeks are really simple and graphic but structured.”
—RACHEL GOODWIN, MAKEUP ARTIST

“Violet lips give a small glimpse into a woman’s darker side — the side she only reveals to those brave enough to follow her there.”
—RACHEL GOODWIN, MAKEUP ARTIST

“Feeding off the slightly mussed-up hair, this eye is reminiscent of the ’60s but slightly askew, slightly imperfect.”
—RACHEL GOODWIN, MAKEUP ARTIST

In polite society, ROLE play should NOT be confined to the bedroom.

Liv Tyler discusses the intricacies of acting for television and bathing rituals with friend Eva Mendes.