The Chanel celebrity makeup artist on going from fetish clubs to high fashion, working with Hollywood icons, and indulging her love of ice cream.
Written By Christine Whitney 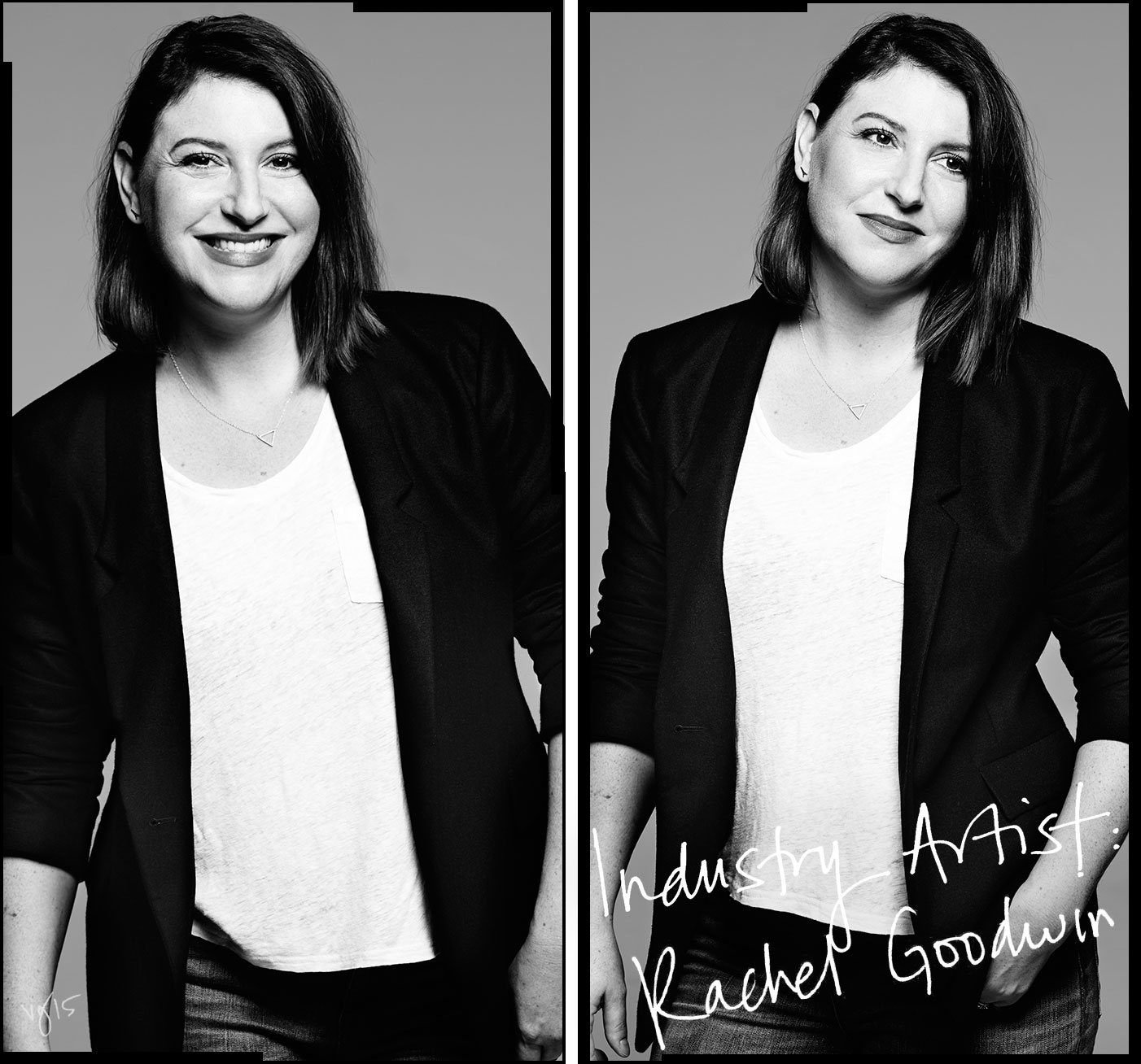 ARTIST STATS
Name: Rachel Goodwin
Known For: Red carpet beauty with an editorial touch, inventive use of color, natural with a twist.
Where to Find Her: Los Angeles
Clients: Emma Stone, January Jones, Amber Valletta
Years in the Industry: 21+
Instagram: @rachel_goodwin
Beauty Essential: Chanel Hydra Beauty Micro Serum
Mentions in The Violet Files: Cover Story: January Jones, Beauty Test: January Jones, The Sixties Eye Tutorial, The Wedge Eye Tutorial, Red Carpet Makeup Secrets, Makeup Brush & Tool Maintenance, 6 Ways to Wear Red Lipstick.
Agent: Alexandra Feldman @ Starworks Artists
“Vanity is very boring to me—so boring,” asserts makeup artist Rachel Goodwin. “For me, makeup is about expression and not about insecurity.” The Los Angeles–based artist, who has represented Chanel for the past nine years, is also a go-to for a devoted following that includes January Jones, Emma Stone, and Amber Valletta. Clients seek out Goodwin for her expert use of color and her ability to infuse natural beauty looks with an element of surprise—not to mention her easy mirror-side manner. “I’ve always been a girl’s girl,” Goodwin says. “[The makeup chair] can be an incredibly vulnerable place, so I’m always trying to set the stage for trust and for something great to happen.”

Goodwin has been setting that stage for a long time. At age 3, she began obsessively drawing women’s faces, a pastime that evolved over the years. “I would always have them dripping in diamonds,” she says. By the time she was 9, growing up in San Francisco, Goodwin was “obsessed with iconic beauties like Marilyn [Monroe], Marlene Dietrich, and Greta Garbo,” and beginning to use real faces as her canvas. “I plucked out so many of my poor friends’ eyebrows trying to make them into Greta Garbo. There were many, many brow casualties,” she remembers with a laugh. Later, Goodwin began studying with the head makeup designer for the San Francisco Opera and moonlighting doing makeup at fetish clubs. “That was very big in San Francisco,” she says. “I loved it because I could use a lot of glitter.” When her high-fashion aspirations outgrew San Francisco, Goodwin went east to paint a bigger town. In New York, she assisted big-name artists like Linda Cantello, James Kaliardos, and Tom Pecheux while working part time at the MAC Pro store and doing test shoots on her lunch breaks. “I was absolutely determined,” she says. “I remember Linda Cantello telling me, ‘No one will know your name for ten years.’ And I was like ‘What? That can’t be!’ But you know, she was right—to the day.”

Goodwin’s break came in 2000 with an introduction to photographer David LaChapelle, who hired her for an editorial job in L.A. It went so well that Goodwin wound up moving here. “I had a fashion book instead of an actress book, which was rare in L.A., so I was immediately hired by photographers who were out here from New York,” she says. “I was able to jump the line a little.” Soon afterward, she was working with such reigning Hollywood queens as Jodie Foster and Diane Lane, rising stars of the time, like Jennifer Lawrence and January Jones, and supermodel Amber Valletta, who had been a longtime inspiration. “She’s one of my absolute dream faces,” Goodwin enthuses. “She epitomizes strong female beauty. In the nineties, there was this one image of Amber in i-D that I ripped out and hung on the wall of my apartment in Queens. Years later, I’m in her house and there’s [the original] on her wall and she’s telling me the story about it…”

By the time Chanel came knocking in 2004, it was clear that Goodwin was a force to be reckoned with. She also happens to be one of the most benevolent forces around. Her relationship with her clients is almost shamanic. “It’s a conversation, ‘Where are you at? What do you want to reflect today?’” she says. “I have to be able to help them connect to what they want to express, and what they’re feeling as women.” Goodwin is also an irresistibly down-to-earth mother of two who runs an ice cream Instagram, @thesundaetimes, in her spare moments. (“Ice cream is a very emotionally charged food,” she says.) While she longed for mass appeal early in her career, she has come to a place of extreme comfort with herself as a person and an artist. “I grew up, and figured out that I had a unique outlook that was only right for particular people. I ended up working with these incredible women who like themselves,” she says. “There’s a quote, ‘I’d rather be someone’s shot of whiskey than everyone’s cup of tea.’ And that’s really how I see it.”

Rachel Goodwin on beauty essentials, swooning for Swinton, and the longest makeup routine in history.

MAKEUP BY RACHEL GOODWIN
NEVER-FAIL PRODUCT
Chanel Hydra Beauty Micro Serum. I use it under and over almost every makeup I do. It’s my favorite way to prep skin because it creates the perfect canvas.
MUSE
I love Lou Doillon’s style. She has that cool French girl thing that gets me every time. Chrissie Hynde is my rock-and-roll style icon—she’s such a badass! And if I had a time machine I would love to be a witness to Empress Joséphine’s four-hour beauty routine. It was supposedly even more elaborate than Marie Antoinette’s.
DRUGSTORE DISCOVERY
Burt’s Bees Radiance body lotion. One of my clients turned me on to this a few years back. It has a subtle shimmer that photographs beautifully. I use it regularly for shoots and red carpet events.

MAKEUP BY RACHEL GOODWIN
MANICURIST
I typically go to Bellacures or Moon Nails in my neighborhood for convenience. If I’m lucky, Stephanie Stone will come to my house; she is a friend and does amazing work.
HAIR STYLIST
Mara Roszak cuts my hair. She has known me for so many years that I never have to say a word—she always knows what will make me feel most myself.
FLORIST
Bloom & Plume. Maurice Harris’s Instagram should be counted as a natural treasure, and he’s wicked talented.
NECESSARY INDULGENCE
Boxes of peaches from Frog Hollow Farm, Le Feu de L’Eau candles, Kundalini Yoga, Thai massages, Serge Lutens fragrances, ice cream sundaes, Chanel lipstick, BBC period pieces, and Manhattans made with Bulleit bourbon.
ANTI-AGING STRATEGY
I hang out with people who make me laugh, eat lots of avocado and coconut oil, wear sunscreen every day, and never go to bed without drenching my skin in moisturizer. So far no medical procedures, but I’m not saying never.
CAN’T LEAVE HOME WITHOUT
My Make Up For Ever brushes and my Beauty Blender sponges. Makeup artists are essentially painters, so my tools are everything.
MIRACLE WORKER
SK-II masks are my saving grace—they make my skin look like I’ve actually had a good night’s sleep in the past six months.
DREAM APPOINTMENT
Tilda Swinton is like a unicorn. I would love to work with her. I have no idea what I would do, but I suppose she’d make me look like a genius because she can pull off anything. Or I might just faint.
PLAN B
Ice cream maker or party planner.
DO YOU SEE A PERFUME BOTTLE AS HALF-EMPTY OR HALF-FULL?
Definitely half-full!

MAKEUP BY RACHEL GOODWIN
FAVORITE SPA
Tomoko in Beverly Hills is my favorite place to treat myself when I need a reboot. It’s utter perfection.
COLORIST
Toni Chavez takes care of my hair color. I don’t know how he does it, but he’s got my natural base down to a fine art.
MASSEUR
Gregory Lewis. He is the most amazing masseur I’ve ever known, an actual miracle worker. I’ve never had a better massage.
PREFERRED VACATION DESTINATION
We love to rent a house over the water in Tomales Bay, right outside Marin County where I grew up, and eat oysters day and night. I am also drawn to New Orleans like a moth to a flame. For weekend trips we can’t get enough of Ojai.
HEALTH & WELLNESS SPOT
When I’m under the weather I get vitamin shots at Cedarhouse on Cahuenga Boulevard. They also have infrared saunas and sell tonics and the like. It’s a one-stop shop when you need a little health boost.
THE FIRST THING I NOTICE WHEN I MEET A NEW PERSON IS THEIR...
Teeth. I love quirky teeth. And brows, of course.

“My husband gets so mad at me because it’ll be 4:30 and I’ll be like, ‘Wait, we have to go try this [ice cream] place!’ And he’s like, ‘So, you’re giving the kids ice cream before dinner? You’re basically everyone’s fantasy mom right now.’” —RACHEL GOODWIN

CHURRO BOROUGH, LOS FELIZ
“This place has amazing churro ice cream sandwiches. We were at the park the other day and my 3-year-old asked if we could go to the ‘Churro Burro place,’” Goodwin says. “I’ve created a monster.”
QUENELLE, BURBANK
“I’m obsessed with this place. The owner was the pastry chef at Water Grill and started his own shop. It’s probably one of my absolute favorite places to get a sundae. Sadly, I don’t get there very often because it’s in the Valley...or maybe it’s better that way.”
SALT & STRAW, LARCHMONT VILLAGE
Portland import Salt & Straw “is right down the street, so I’m there way too often,” Goodwin says. “I always get their Roasted Strawberry & Toasted White Chocolate ice cream with hot fudge. It’s probably one of my favorite things to eat in the ice cream world.”

Amber Valletta models Goodwin’s takes on the iconic look through the decades.