The beauty oil baroness shares her musings on aging, Instagram, and her signature look.
Written By Jess Basser Sanders 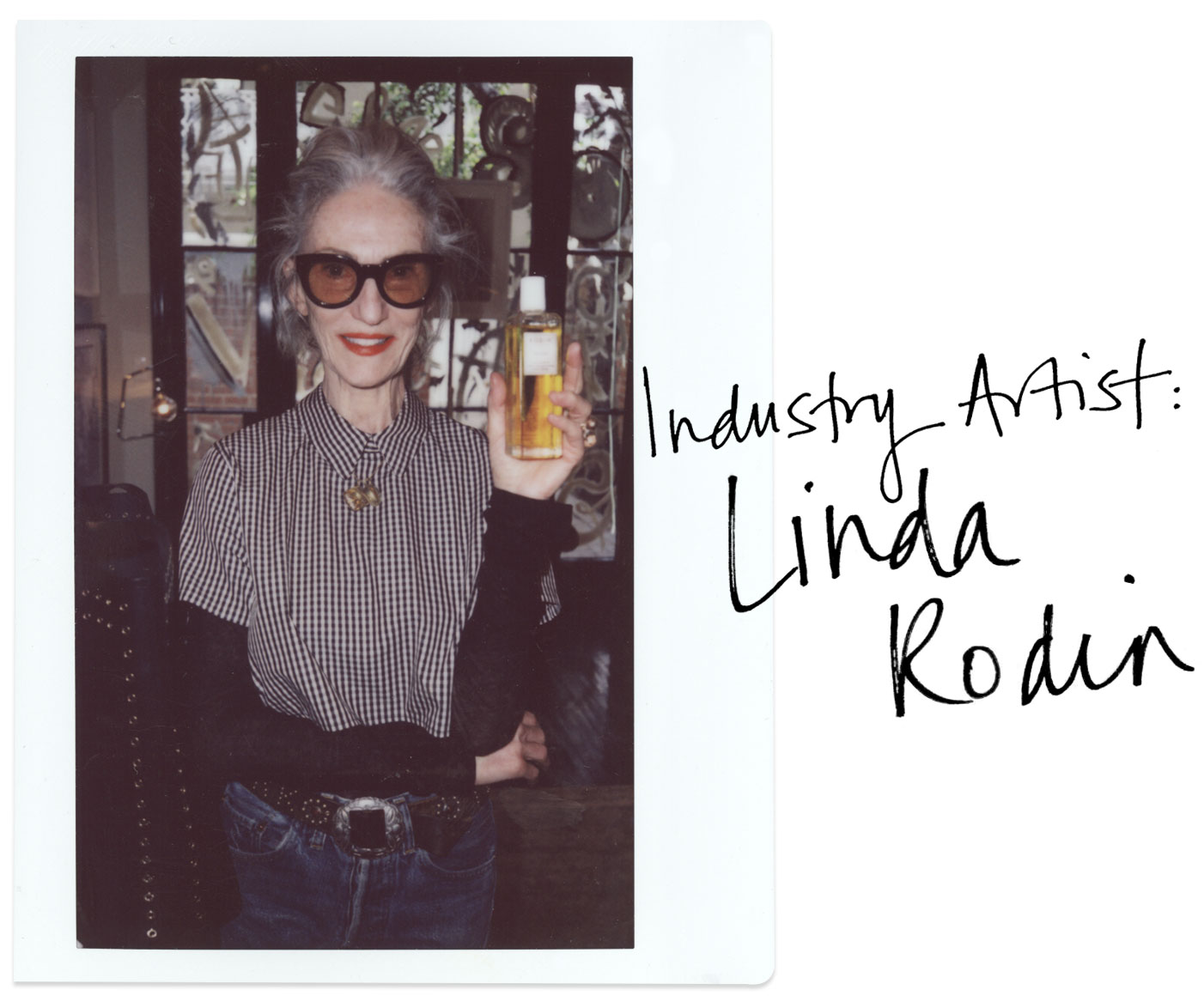 Stylist, model, and late-blooming beauty mogul Linda Rodin is testament to the wonder of second acts. After a long, successful career modeling and styling, she founded Rodin Olio Lusso just before turning 60, single-handedly kicking off the beauty industry’s obsession with face oils. On a visit to VIOLET GREY’s Melrose Place flagship, the singular Rodin shared the inspiration behind the brand.
Perched on Dean Martin’s leather director’s chair in the VIOLET GREY studio, Rodin is the picture of elegance. Her signature look (immortalized in drawings by @Drawbertson and The Row’s Pre-fall 2014 campaign) consists of shimmering silver hair (loosely coiffed, always perfect) and a shock of bright crimson on her lips. She’s a woman who knows what she wants, a quality that led to the creation of her signature product and the founding of her brand. “I’ve been on photo shoots with every great makeup artist and hairdresser, and I would always look at their tables and say, ‘Oh, I’m going to go out and buy that and try that,’ [but] I never really found what I liked,” she says.

Eight years ago, Rodin took matters into her own hands—and vanity—and concocted a face oil to satisfy her desires. The first batch, comprising 11 essential oils thrown into a coffee cup in Rodin’s bathroom, provoked a true eureka moment. And when she started showing up to set with her homemade oil in tow, models and makeup artists began to ask for bottles of their own. But it wasn’t until a visiting nephew encouraged Rodin to make it official and measure out her formula that Rodin Olio Lusso was born.

Eleven products and a cult fashion following later, Rodin the company is beginning a second act of its own after a recent acquisition by the Estée Lauder family of brands. Just more than a year out, Rodin herself seems liberated. “They understand me. They understand that I don’t have to make a hundred lipsticks, that it’s a very personal point of view and a lifestyle point of view, and they really embrace that,” she says of the Lauder brass. She is also relishing the opportunities that come with life under Lauder’s wing, such as developing a line of lipsticks slated to launch early next year. “If anybody can make a lipstick, it’s Estée Lauder,” Rodin proclaims. But to her earlier point, the collection features a tight edit of four lipsticks, not 400. (Three are her signature brights; the fourth is an homage to the color her mother wore (“a cross between strawberry, raspberry, and blueberry—I haven’t seen anything like it”). And the beauty world has never seen anything quite like Linda. Read on for more pearls from the elegant innovator.

the musings
OF LINDA RODIN

On being the godmother of the beauty oil revolution…
“Who knew? I don’t make any claims, I don’t say anything about anything, and it is what it is. I think maybe it’s the honesty behind [the brand]. Everybody, from 20-year-olds to 100-year-olds, loves it.”
On her beauty routine…
“When I wake up in the morning I just use warm water and don’t cleanse my face. I pat it dry—not too dry—and I pat the oil on with my fingers. I don’t wear makeup or anything, just lipstick and sunblock. Then at night, I cleanse with my powder that I’ve been making for three years [newly available as part of the Rodin line], I again pat my skin to take a little moisture off, and then I put the oil on.”
On travel...
“If I’m on a plane I take out [the face oil] every half hour because I feel oh-so-dried-up!”
On makeup and aging…
“Personally, I think women who get older look better with no makeup. You know, I have age spots and freckles, and I wish I didn’t but I do, so I just keep it really simple. Lipstick I learned about from my mom. I never go outside without lipstick. I mean, I walk the dog without it, but if I’m going anywhere else I just feel naked.”
On shopping...
“I shop alone, ’cause I don’t want anyone saying, ‘Oh that looks great on you, you’ve got to buy that!’ And then I get home and it doesn’t look good on me. I’m much better with my own vision and sticking to my guns. I’ve kind of always been that way.”
On her signature look…
“I didn’t do it by design. My hair went gray and I never colored it; that never occurred to me. I can’t see, so I had to get glasses...and I look better in [lipstick] than not, at my age.”
On her love of Instagram…
“It’s just this crazy yellow brick road of following the most interesting images I would never see otherwise.”
On styling...
“I love to style myself now; it’s so much easier than dressing other people. I know exactly what I want and I don’t have to second-guess anything—either I like it or I don’t.”
On the rise of mature style icons on the street and in advertising…
“They are the people who are going to buy the clothes, who have the money to buy the clothes. I think it’s a wonderful demographic that was embraced, but I kind of don’t see Prada picking some octogenarian [for their ads]. I think it [doing The Row’s campaign] was a perfect moment to embrace it all, but I don’t know if it’ll continue in high-end fashion ads.”
On her muse…
“Winky, my miniature poodle. I swear to God, I look at him and I go, ‘I want to be that guy.’”