Makeup artist DICK PAGE went from hitching rides home to working with Kate, Naomi, and Christy—and has since become his own kind of legend.
Written By Christine Whitney 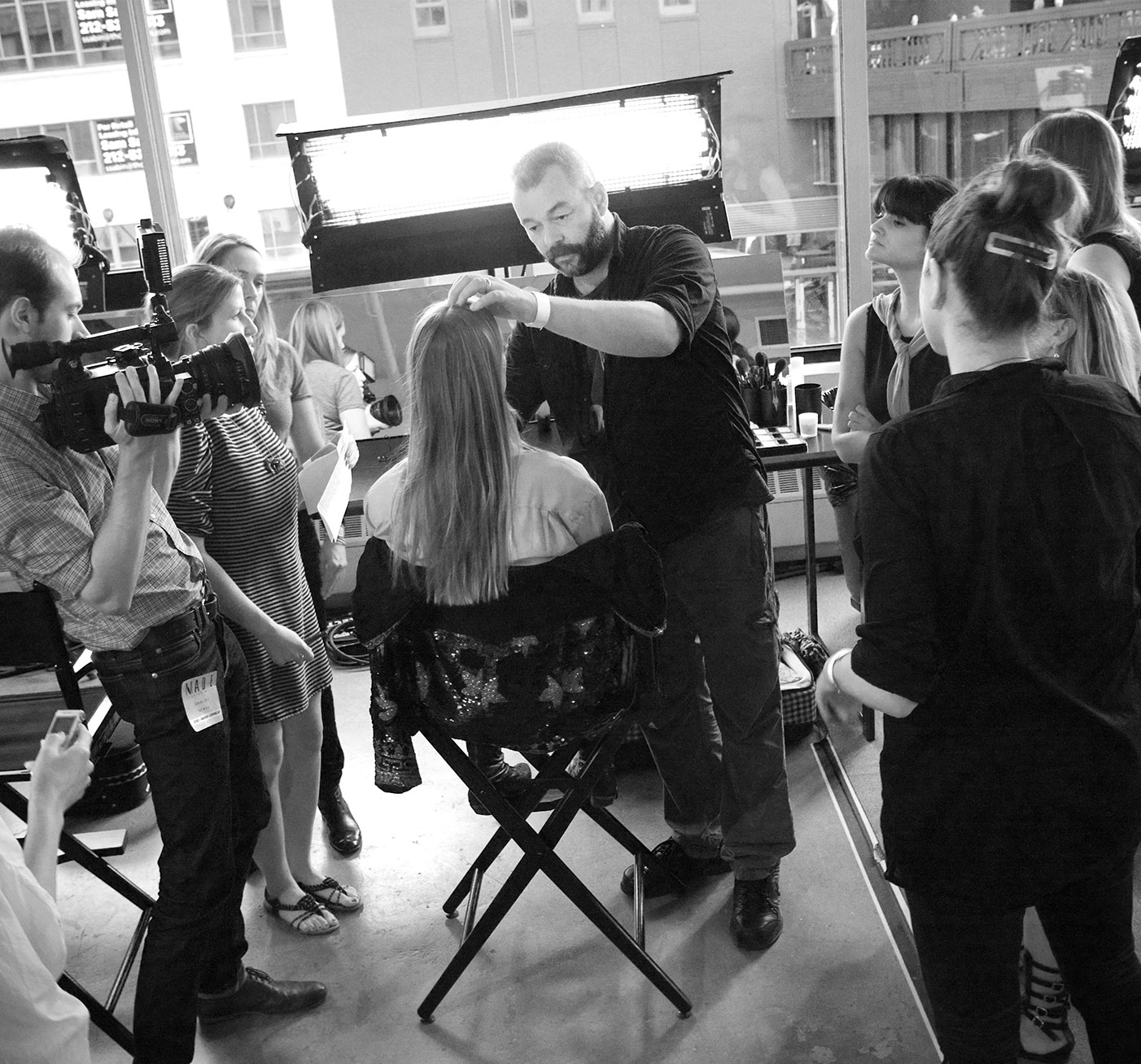 Dick Page has painted the faces of every supermodel to storm through the ‘90s, every Victoria’s Secret Angel worth her wings, and an exclusive coterie of A-List actresses, like Julianne Moore and Catherine Zeta-Jones. With his towering frame and tawny beard, Page cuts a distinctive, lumberjackian figure, and is a fixture backstage at fashion week, where models hope to have the good fortune to land in his chair. But it was not always so. “When I first moved to London, for the longest time I wasn’t making any money,” says the British-born artist of his early days in the industry. “I was working the night shift in a photo-processing lab, and walking or hitchhiking because I didn’t have the bus fare. It was like ‘lunch, or mascara?’ Page chose wisely. He began working with photographers David Sims and Corinne Day, and, in 1993, caught the eye of Calvin Klein with the (now signature) no-makeup makeup look he created on a 15-year-old Kate Moss for Britain’s indie-pop magazine, The Face. The rest, as they say, is beauty history.
Page has worked with Japanese luxury beauty brand Shiseido since 1997; since 2007, he’s acted as artistic director of Shiseido The Makeup. He’s lent his hand to countless editorials for the likes of Vogue, Harper’s Bazaar, and Allure, and campaigns for such brands as Saint Laurent and Miu Miu and worked with the fashion industry’s leading photographers, from Guy Aroch, who collaborated with Page for VIOLET GREY, to Inez and Vinoodh to Juergen Teller to the late Richard Avedon. But despite his relationships with fashion’s and Hollywood’s Who’s Who, Page is modest about his celebrity cache. “I didn’t really land really hard with any celebrities per se, because I can get kind of star struck or nervous about the whole fame thing,” he says. Nonetheless, Page says he considers Catherine Zeta-Jones a kindred spirit. “She’s lovely to work with. I grew up in the west of England, and she grew up in Wales about 45 minutes away. So there’s a kind of shared sense of humor and experience, kind of like a shorthand, we understood a lot of the same references.”

Nowadays, Page himself is something of a celebrity, though he’d be loathe to say so. “I’ve had to let people go from teams because they are just so into the whole idea of the glamour of it, and all they want to do is take selfies with the model. Just do your job, shut up, and do the work,” Page explains on how to truly succeed in face painting (a playful term he often uses when crediting his own work on Instagram). His final words of advice to aspiring makeup artists? “Be professional, punctual, polite, and a good team player,” he says. “Learn to be a small part of a great picture rather than another big part of a lousy picture.”

Dick Page opens his beauty bag and talks dream clients, homemade pickles, and the best advice he ever received

BEAUTY IS...
In the eye of the unreliable beholder.
MUSE
No such thing—if I’m excited about a look it’s about the entirety of the person. It’s very rare that I would just be turned on by the style.
MANTRA
“Don’t fuck it up.”

WHO’S YOUR MENTOR?
I don’t really have one, but Paul Cavaco is someone I’m thankful for. He gave me really great advice: “You might not have to do everything, but you should be able to.” And that’s the kind of thing I say to my assistants: “You may not have to re-create the Peggy Moffitt eye with four sets of false eyelashes, but you should be able to.”
DREAM APPOINTMENT
Glenda Jackson, an English actress who retired early on and who has been in politics in England for a long time. I really just want to meet her—she would probably blot the makeup off. She’s never had any plastic surgery, and she just looks like a regular housewife. She said, “It’s not just about the face, it’s about voice.”
FINISH THIS SENTENCE: THE FIRST THING YOU NOTICE ABOUT A PERSON IS:
Their expression, or lack of. When someone is frozen solid with Botox there is no engagement.
TWO ITEMS ALWAYS IN YOUR KIT
A Graftobian foundation palette—it has a lot of tones in it and is handy to mix and match. I was talking to John Currin, the painter about this—about how skin looks and how skin really is. If you spend a while really looking at someone’s face you can see the blues, the greens, some grays in there, you know skin is not pink or beige or ocher. Kryolan’s Jugendrot pigment cream, which in German means “Youth red.” They use it on stage for young characters. It’s generally used for cheeks and I use it on the lips as well.
FAVORITE GIFT TO GIVE
Food I make, like sauerkraut or pickles—very grandma of me, I know. Leftovers too. We have a lot of people over to eat, so they’re always happy to take leftovers home. Cuz you know no one in New York cooks.
DRUGSTORE SECRET WEAPON
I’m always buying grease—I like it as a carry for light on the eyes, shine on the lips. I like Biopel from Spain, and Vaseline is great. I mix them up; I make my own with gold or silver pigments and call it my magic goop.
WHAT’S THE MOST REWARDING PART ABOUT WORKING WITH SHISEIDO?
The hard part! I work in a very slow, long-winded way. To create the color I take photographs, and then paint acrylics on big 10’ by 12’ paper panels. And then the people at the lab in Japan match my colors by eye. I don’t go to them with existing products, I don’t bring them lipsticks and say “Make a version of this.” I’m the remaining idiot who does color like this—I’m the analog and everyone else is digital.
NECESSARY INDULGENCE
The usual: food and sex.